Today, we’re comparing the CZ P10c vs Smith & Wesson M&P 2.0 Compact. Both guns are striker-fired, have 15-round capacities with flush-fit magazines, and come to market at similar price points. Despite these similarities, there are also multiple differences between the two that we’ll cover in detail in this post.

As I pointed out above, both of these firearms hold 15 rounds and are very similar in size to the Glock 19. Many consider the G19 to be the ultimate one-size-fits-all firearm. A handgun of that size is large enough to act as a duty gun but small enough to conceal.

The Smith & Wesson M&P M2.0 is one-tenth of an inch shorter than the CZ P10C. Overall firearm height is a very important dimension when it comes to concealment. That that extra tenth of an inch on the P10C does come into play. It makes the gun more concealable than the. The width of the grip on both handguns is identical, though that is another important factor when considering handgun concealability. 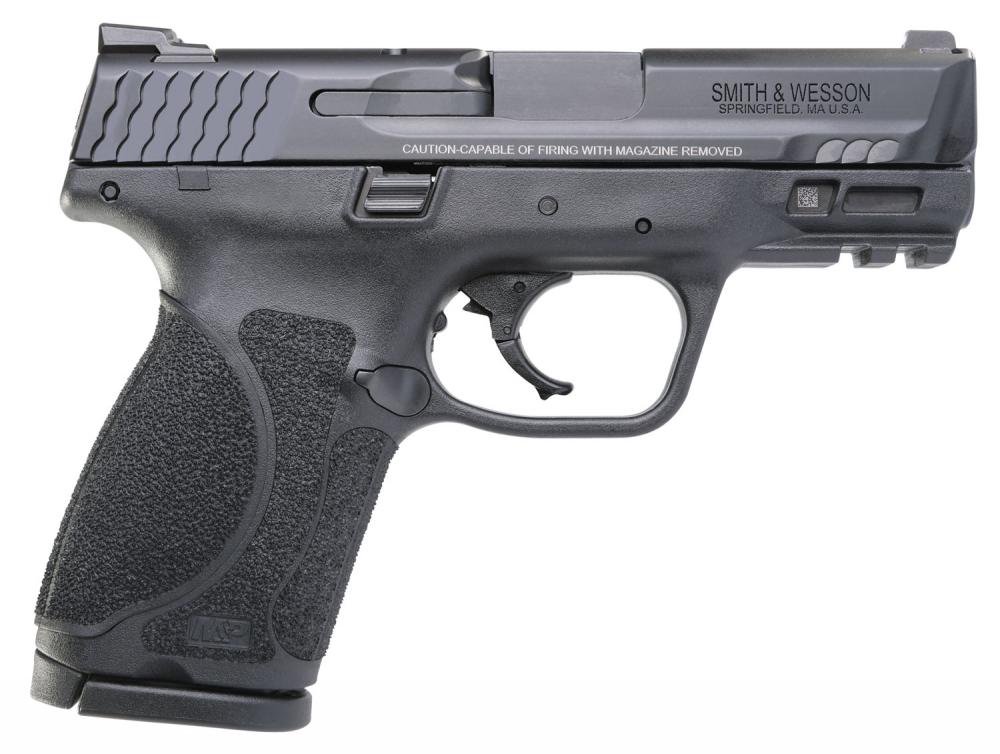 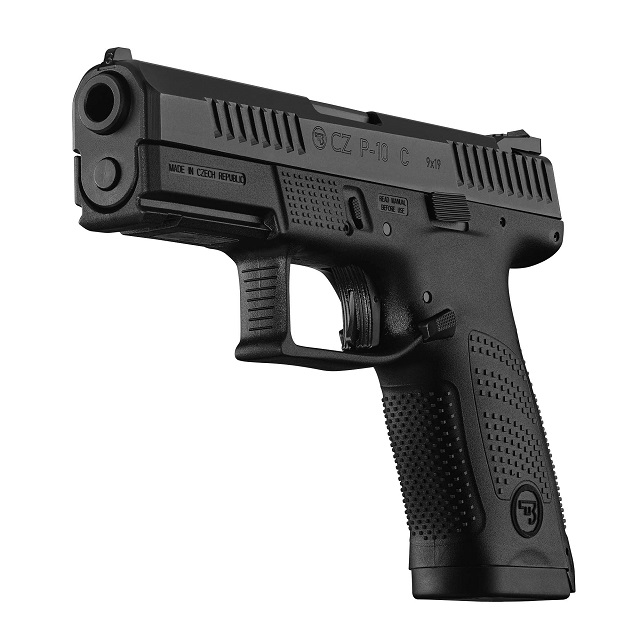 The P-10 C forces the most mediocre, inexperienced shooters to get a very high grip on the firearm. While the M&P M2.0 feels better in the hand, it does not achieve this, so I’m going to have to give some extra points here to the CZ P-10.

Both of these guns exhibit fantastic aggressive texture – in fact, the texture might be too aggressive for many. I personally find that I like this texturing a lot when I’m shooting the firearm and can’t give an advantage to either one when shooting these guns straight out of the box.

Another advantage of the P-10 C over the M&P 2.0 Compact is the fact that the texturing on the CZ P-10 C is, like I said before, only aggressive on the front and back straps of the firearm, but the Smith & Wesson M&P M2.0 Compact has aggressive texturing 360 degrees around the grip. This can be a pain for some people when doing concealed carry as the grip could chafe against their skin. If you have even somewhat slightly sensitive skin, I would definitely go with the CZ P10c vs M&P 2.0 Compact for concealed carry.

However, when it comes to the rear serrations of the firearm, the M&P M2.0’s serrations are much more effective than the P-10 C’s. If you plan on manipulating the gun to use the front of the slide to do something like a press check, the P-10 C is a better option. If you do most of your manipulations from the rear of the slide, though, then the M&P M2.0 Compact is going to be the winner.

Both of these models have multiple sight options from the factory depending on the variant you purchased. The baseline sights that come on both firearms are your standard three-dot metal sights.

They aren’t great, and they probably need to be replaced if you plan on shooting this gun a lot, but they’re definitely usable if this is just a safe queen or range toy. The CZ P-10 C three-dot sights are actually aluminum, so I’m going to have to dock some points for that and give the win here to the Smith & Wesson M&P M2.0 Compact vs. the CZ P-10 C.

You can get a slight amount of optic on both the CZ P-10 C and the Smith and Wesson M&P 2.0 direct from the factory. CZ calls this their OR or “optics-ready” version, while Smith & Wesson calls it their core series. The core series comes with standard three-dot sights, just like the regular Smith & Wesson M&P, except these sights are suppressor-height sights and will co-witness with the optic you choose to mount on the firearm. The CZ, on the other hand, comes with a better set of sights. These sights have a blacked-out rear and a front night sight with a bright orange ring around the tritium bile.

The downside of these CZ sights is they will not co-witness with most dots on the market, so they’ll have to be replaced. In a way, it’s kind of a waste to send such great sights with an “optics-ready” gun when they likely won’t be able to be used. Even if you don’t plan to add an optic to your CZ P-10 C, you might want to consider that over the standard gun just for the upgraded sights.

There is no external safety option for the CZ P-10 C, while the Smith & Wesson M&P M2.0 Compact can be purchased either with or without a thumb safety. The thumb safety on the Smith and Wesson M&P M2.0 Compact is very similar to a 1911 in its placement and design and is also ambidextrous for both right- and left-handed shooters. Overall, Smith & Wesson did an excellent job on this feature. If you want a thumb safety there is obviously not reason to go CZ P10c vs M&P 2.0 Compact.

Besides that, both of these guns have a very short reset. They’re just typical striker-fire triggers. They have take-up, you reach a wall, you’re going to feel a little bit of creep before they break, and then they reset very nicely at that wall. I really can’t complain about either trigger and I’d have to say they’re on par. I would actually give a slight advantage to the Smith & Wesson M&P M2.0 in the way it breaks – to me, it feels like it’s just a tad lighter and I really like the feel of the trigger – but I don’t think you’re going to go wrong with either one of these triggers.

Unfortunately, the slide lock on the CZ P-10 C is incredibly stiff and hard to press down. For some guns, it does break in, but others remain this way even after thousands of rounds. The slide locks themselves are also very sharp, so despite being ambidextrous, there’s no real advantage to those of the Smith & Wesson M&P M2.0 Compact.

The Smith & Wesson M&P 2.0 Compact has more crudely-designed slide stops, but they’re ambidextrous and easy to use. They’re comfortable, well-rounded, and despite looking like basic stamped sheet metal (which they are), they work better than the CZ P-10 C slide stops.

The Smith & Wesson M&P M2.0 has a standard push-button magazine release mounted on the left side of the gun and reversible to the right of the gun for left-handed shooters. It’s easy for me to reach it without breaking my grip and I have no complaints with this magazine release. It’s easy to use, basic, and there’s nothing more to say about it. The CZ, on the other hand, has a couple of different options.

Now, if your magazines are partially-loaded when you’re trying to eject the magazine, then you’re not going to find the magazine release on the CZ P-10 C as easy to use as the one on the Smith & Wesson M&P M2.0 Compact. Due to some complaints CZ has received, they have started making a newer version of the CZ P-10 C which has a left-side-only magazine release that is also reversible to the right side of the firearm.

This is much easier to use with partially- and fully-loaded magazines in the gun. If you get a newer CZ with that feature or one that’s being made in the U.S., the magazine release is on par with the Smith and Wesson M&P 2.0 Compact.

There’s no bevel in the magazine well of the Smith & Wesson M&P M2.0 Compact, while the CZ P-10 C does have a slight magazine bevel in that gun. Both of them feature a rear extension off the grip of the firearm that makes it easy to insert a magazine, but it’s even easier on the CZ P-10 C due to that slight bevel.

Both of these guns are quality firearms, but the CZ P-10 C just feels to be of a higher quality than the Smith & Wesson M&P M2.0. When Smith & Wesson changed from the original M&P to the 2.0 series, the polymer they used on the frame started to feel cheaper.

I personally like the 2.0 series much better, but they don’t feel like they’re as high quality as the original guns. I’m going to have to say the CZ P-10 C just feels like a more quality firearm.

Overall, I personally like the aesthetics of the CZ P-10 C a little better than those of the Smith & Wesson M&P M2.0 Compact. It’s just a little busy on the design. There are lots of small details on the M&P M2.0, and those details are just too much. It’s too busy. The CZ P10C, on the other hand, appears to be a much sleeker firearm that still has some nice details in just the right places. Your opinion may be different, but that’s mine.

Both of these firearms are fantastic shooters, and frankly I have a really hard time deciding which one I like more.

As a more experienced shooter, I shoot both of them very well, but I do think most newer shooters will find the CZ P-10 C just a little easier to shoot than the Smith & Wesson M&P M2.0 Compact. Both guns have really good recoil impulses and the texturing makes them an absolute dream to shoot since they’re not going to slip around in your hands. The CZ’s ergonomics just force you to have a better grip, and I think that’s a major advantage to a newer shooter.

MSRP on the SW M&P 2.0 Compact ranges from a baseline $599 to $634 for the optics-ready model while the CZ P10c MSRP is significantly cheaper, ranging from $499 to $577. Street pricing on Smith and Wesson products varies a lot depending on market demand and dealer/distributor promotions. The company also doesn’t have a strong MAP (minimum advertised price) policy.

In a typical year, the M&P M2.0 Compact would likely have a street price similar to the P10c despite the higher MSRP. With all that considered, I’m going to give the edge in value to the P10c as it feels like a higher-quality firearm.