Using design trades from both the Browning Hi-power and the Walther P38. The CZ 75 is, some would say the best of both worlds. It has the super smooth double action single action trigger while having the wonderful ergonomics of the Browning Hi-power. You can easily find clones of the CZ 75. This is because it’s the second most copied handgun in the world following only the 1911.

The CZ 75 is somewhat outdated by today’s standards. Meaning it doesn’t have a light rail and the double-action single-action system has fallen out of favor. The CZ 75 is also quite heavy. That said it’s still is an excellent gun for competition or general range use. Most people aren’t going to want to use it for duty use due to the lack of a light rail.

If you’re into retro things, it’s definitely a great gun for concealed carry. It’s not as light as other options. For that reason, I don’t think it’s the most practical. If you want to carry with a stylish firearm that has a retro feel the CZ 75 is going to be very hard to beat. It’ll work well for IWB, appendix IWB or OWP carry, you can carry it however you would like. 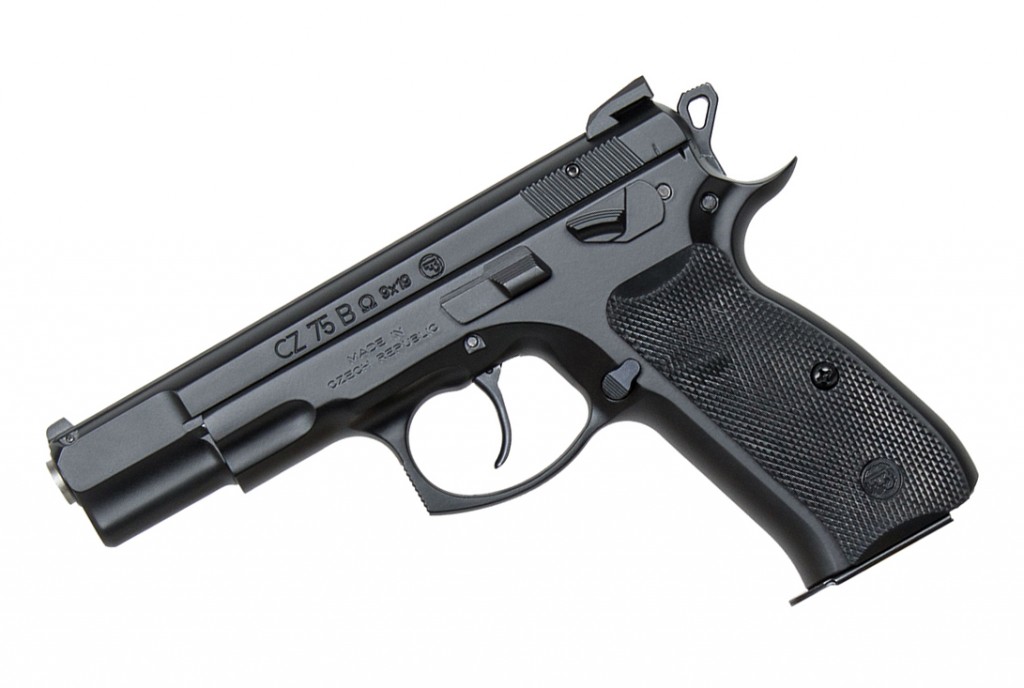 The CZ 75 come standard with a 16 round magazine. Although you can get 17 round magazines that will flush in the buck and the grip. They just have a slightly longer base pad around an eighth of an inch. You can also get 26 rounds CZ 75 magazines that fit within the USPSA 170 millimeter category. These magazines are made by Mec-Gar. It’s nice that you can buy CZ 75 factory magazines at a reduced price. This is becuase Mec-Gar is the OEM manufacturer for CZ and they sell CZ 75 series magazines direct, under the Mec-Gar brand.

Magwell on the CZ 75 isn’t anything special. There is no flare whatsoever. So you’re not going to get any help from the gun if you botch your reload. That is one downside of using the CZ 75 as a competition-style pistol.

The CZ 75 was designed in the late 60s mid-70s. Due to this, there isn’t a lot of modularity built into the pistol. It does have removable pistol grips, and there are a variety of aftermarket grip options that you can switch out. This does give you the ability to change the feel of the grip in your hand. But you really don’t need to, the grip on the CZ 75 feels absolutely excellent. The only thing you want to do is switch out the grip to change the texturing.

The Beavertail on the CZ 75 is incredibly well-designed. It fits with the rest of the pistol and there’s a nice taper as it melds into the frame. This makes the gun feel extremely slim in the hand. Allowing you to get a very high grip on the handgun. I’m not normally a big fan of beavertails on firearms from the CZ 75 it just works. It really allows you to get your grip as high as possible without having to worry about slide bite. It’s just a comfortable grip that fits in anybody’s hand.

The only texture you’re going to get on the CZ 75 is going to be from the grip panels. Both the front strap and the back strap are completely slick. The grip panels do a good enough job of providing a texture that you don’t really need checkering on the front strap or the back straps. By changing out to more aggressive aftermarket grips, you can get the grips to be as aggressive as you want. There are a ton of aftermarket grip options for the CZ 75. So you’re going to be able to make the gun into whatever you want it to be.

Besides on the CZ 75 has not been updated since its introduction. They are just standard three dots sites and they’re really small. Where kind of like the old sites on a 1911. They’re better than that, but there’s somewhere between that and more modern three-dot site setups.

There aren’t a lot of aftermarket sides often for the CZ 75. CZ custom shop and Dawson precision both make aftermarket sights for this gun. You’ll likely be able to find something that you can live with. But you’re not going to have the variety of options that you would have with other guns, like a Glock.

There’s no factory red dot mounting option for the CZ 75, although a couple of custom shops will set up mounting for you. You can go straight to the CZ custom shop and they have their own mounting system built around the CZ 75 that is somewhat modular allowing you to work with multiple dots.

You can also go to other manufacturers and they’ll mill the gun for a specific red dot. If you’re going to use the CZ 75, I would probably suggest going with one of the newer narrower red dots, like the Holosun 507K or the SIG Romeo zero. Trijicon also has the Trijicon RMRcc, which seems like a great option for the CZ 75.

Being a double-action, single-action firearm, the CZ still does have a thumb safety. This gun was originally designed to be carried, cocked, and locked, meaning you have the hammer back and the safety on. The thumb safety is located on the left side of the firearm and sits fairly flush to the frame.

It’s still easy to access and the shelf is large enough that you won’t have any problem running the gun and when you’re shooting the firearm, you can actually ride your thumb on top of the thumb safety. It’s positioned very similarly to a 1911 and extremely ergonomic. Flicking the safety on and off, you’ll notice that it’s positive enough that you’re not going to have any fear of it inadvertently coming on or off, but it’s also easy enough to move that you won’t have any issues manipulating it.

The magazine release on the CZ 75 is your standard push-button style magazine release. It is reversible, which is a nice feature to have on a gun if you’re a left-handed shooter, although I will say the other features on this gun are not well set up for a lessee. I have average-sized hands that will be considered medium to large size, and I can not fully reach the CZ 75 mag release without breaking my grip so I believe that will be the case for most shooters. That said it’s still an easy mag release to use and I have no complaints. There are some aftermarket options if you want to change that out.

The stop on the CZ 75 is way too far for me to reach without majorly breaking my grip, and it’s also somewhat blocked by the safety itself. Now, the only way I would suggest you using the safety for somebody that doesn’t have enormous hands is when reinserting a new fresh magazine, they’re going to want to drop the slide using their support hand thumb. This is called the Vickers method and it’s an older style used on 1911s and considering the time period of this gun was invented and developed, it makes perfect sense.

It would be nice to see the slide stop mounted a little farther back on the gun so it was more user-friendly, but I really don’t have a problem with the system and you are shooting a retro gun so you’re going to get some retro features.

The trigger on the CZ 75 is absolutely excellent. The double-action pool is very smooth and consistent and it breaks very nicely. You’re going to get just an incredibly smooth trigger pull. Now it’s somewhat heavy, but the smoothness makes up for that, and then from the reset, once the firearm resets, you’re going to fill that it resets slightly in front of the wall that you’ll feel for the single-action trigger. When you feel that it reaches the same point it would if you were to have the safety engaged in the hammer cocked back.

You’re always going to have a slight little bit of take-up before you reach the wall on the single action pool, and from that take-up, if you’re going to have a nice clean break of the trigger with just a tad bit of creep beforehand. It’s not a perfect trigger and if you get one of the CZ 75 pre-B variants that do not have a firing pin block safety, you’re probably going to have a much better trigger, but that creep indicates that you’re overcoming the firing pin block on the safety, which isn’t a bad thing to have.

Maintaining the CZ 75 is pretty straightforward. It does have an older style, a takedown pen. A takedown pen also acts as the slide stop, so to disassemble the gun you’re going to want to make sure it’s unloaded, remove the magazine, make sure it’s unloaded again, and then you’re going to notice an index mark on the back of the slide that when you pull it back around three-eights of an inch will match up with an index mark on the back of the frame, these are both on the left-hand side of the gun.

From there, you can use a pen or a punch to push the slide stop to the rest of the gun, and then your slide will come off where you can disassemble the gun by taking the barrel and recoil springs from the slide.

Once you’ve cleaned the parts then you just reverse the order to put the gun back together.

CZ 75, in my opinion, is an absolutely beautiful firearm. The length of the grip and the length of the muscle are very proportional and the gun just seems well-balanced. It could be a little bit thicker in the front to make it a little more attractive and proportional, but overall it’s a very elegant, retro-style firearm. It makes me think of being a CIA case officer back in the 1980s, Berlin walls, the kind of images you evoke in your head.

The CZ 75 is a fantastic performer on the range. The recoil impulse is what I would call incredibly smooth, and it’s just a joy to shoot. It does have a little bit of muzzle flip, but that muzzle flip really dissipates recoil and the heavy frame helps here as well. This is one of my absolutely most favorite guns. I would seriously consider carrying a CZ 75 if it didn’t weigh almost double similar size modern polymer-frame guns.

The CZ 75 is just an incredible gun to shoot and I think it’s one that everyone should have in their collection. If I ever get into a retro carry gun mood, CZ 75 is probably a gun I will be carrying.