When it comes to concealment you can see the dimensions of the guns are near identical so it’s a wash from a concealment perspective. Where things get interesting is the weight. Loaded with 15 rounds of Federal HST 124 grain plus P the CZ 75 Compact weights 5 almost 4 ounces or a quarter of a pound more than the CZ P01. When you’re comparing the CZ P01 vs CZ 75 Compact for concealed carry weight is likely a metric and long term the CZ P01 is going to be a lot easier on your joints and body. 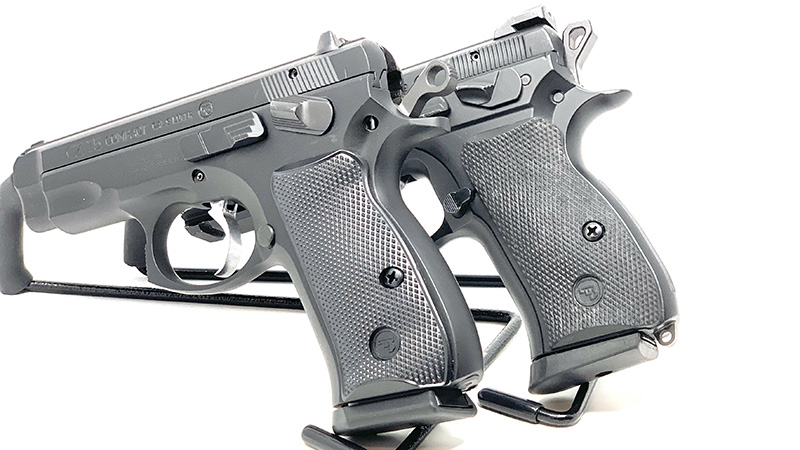 There are quite a few differences between the steel frame on the CZ 75 Compact vs P01’s aluminum alloy frame. Besides the weight which we covered earlier the most notable difference is the width of the frames. The P01 frame is wider at the top portion but when it comes to the grip the frame narrows down so it’s almost identical to the frame on the CZ 75c.

The guns both accept the same grip panels so there is no difference from an aftermarket grip perspective. between the CZ P01 vs 75 Compact. That said from the factory they come with different grips. On the P01 there is a rubbery feeling grip that provides you with good traction while the grip panels on the 75c look and feel more like hard plastic but they still provide decent traction. I personally find the feel better on the CZ 75 compact vs P01 but that’s going to come down to personal preference.

There they do differ on the texturing on the front and back strap. The CZ P01 has vertical lines on both the front and back strap while the CZ 75c has nothing and is completely slick. You do notice a grip advantage on the P01 but if you have a good set of aftermarket grips it can likely negate the difference in traction. But I’m going to have to give the CZ P01 the edge on this aspect.

When it comes to factory sights neither the CZ P01 nor the 75 Compact has steller factory options. If you’re looking for sight radius you’ll want to go with the CZ P01 vs CZ 75 Compact as the CZ 75 sights don’t extend the rear of the slide losing approximately ½ inch of sight radius. The notch on the CZ P01 is a little deeper so I’m going to give the edge to that gun despite the guns having a near-identical lackluster 3 dot sight picture.

If you’re open to aftermarket options then CZ Custom and Dawson Precision both offer a variety of identical options giving no advantage to either gun in the CZ 75 Compact vs P01 debate. 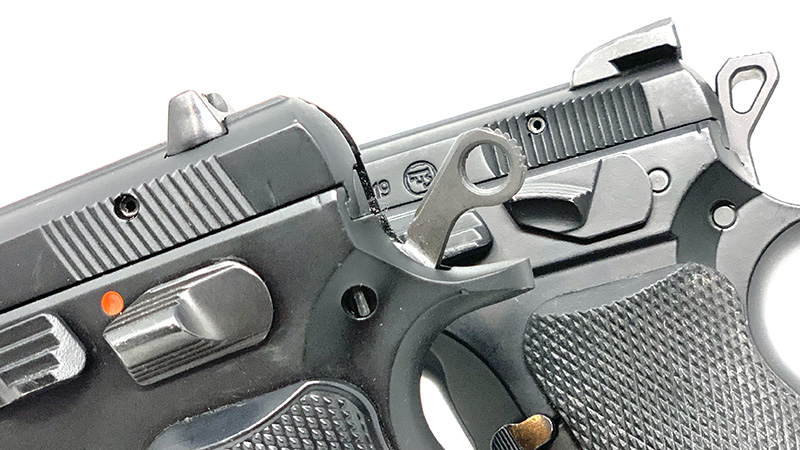 The CZ 75 Compact currently is only available in one variant and has a left side only thumb safety set up for a right-handed shooter while CZ P01 comes in two main variants. You can get the P01 in an identical format to the CZ 75 Compact or in the Omega configuration. Since the non-omega variants are identical there is no point in comparing the safeties on the CZ 75 Compact vs CZ P01.

But it is relevant to compare the safeties on the CZ 75 Compact vs P01 Omega. With the 75 Compact, you can run the gun cocked in locked using single action or you’ll need to manually drop the hammer to decock the gun. Many will rightfully find decocking the gun by manually dropping the hammer to be a potential safety hazard.

On the CZ P01 Omega, you can switch out between a decocker and safety. They’re both ambi so that gives a clear disadvantage to the CZ 75 Compact vs P01 Omega if you’re left-handed or want more options on your gun. 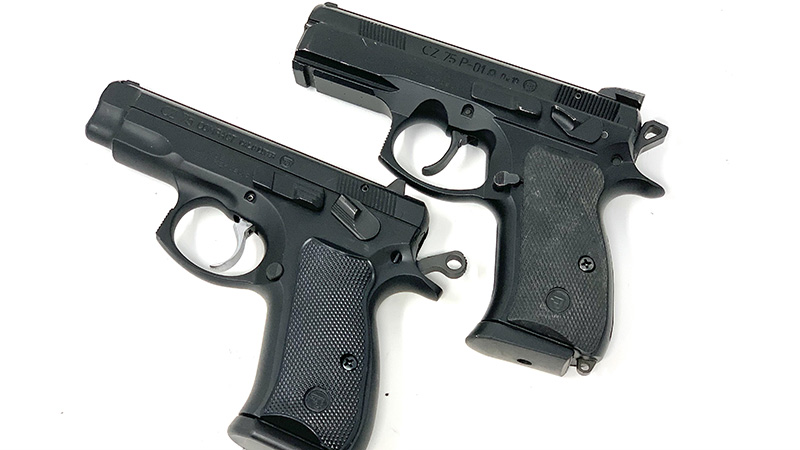 Again there is no point in comparing the CZ 75 Compact vs P01 as their trigger is identical just like the safety. The CZ P01 Omega is quite different from the trigger used in the CZ 75c and P01. In double-action, the weight of the pull feels identical in both but the regular CZ 75 compact/P01 trigger is much smoother.

In single-action, both triggers have a rolling break and the reset is similar although the P01 Omega trigger feels lighter and cleaner in Single Action. When comparing the CZ 75 Compact vs P01 Omega the clear winner of the double-action pull is the 75 compact but the P01 Omega has a slight advantage on the single-action trigger.

One key difference I don’t want to forget to mention is the trigger shoe. The 75 compact has a curved trigger shoe while the CZ P01 Omega trigger shoe is much shorter. 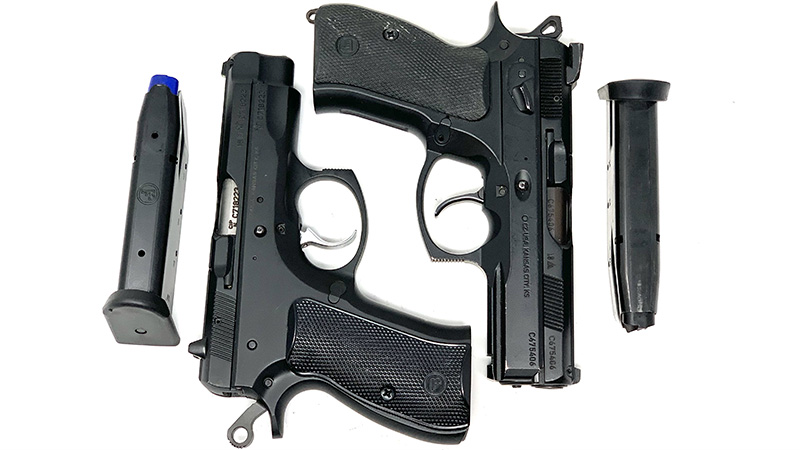 The CZ P01 has a clear advantage here as it has a slight bevel in the magwell while the 75 compact has none. That said it’s not extreme enough to make a huge difference in your reload time.

Aftermarket options on these guns are somewhat limited. Most of the aftermarket is built around grips and trigger parts of which there are plenty of options. But if you’re looking for options like sights and aftermarket magazine releases then you’ll find both of the guns seriously lacking. 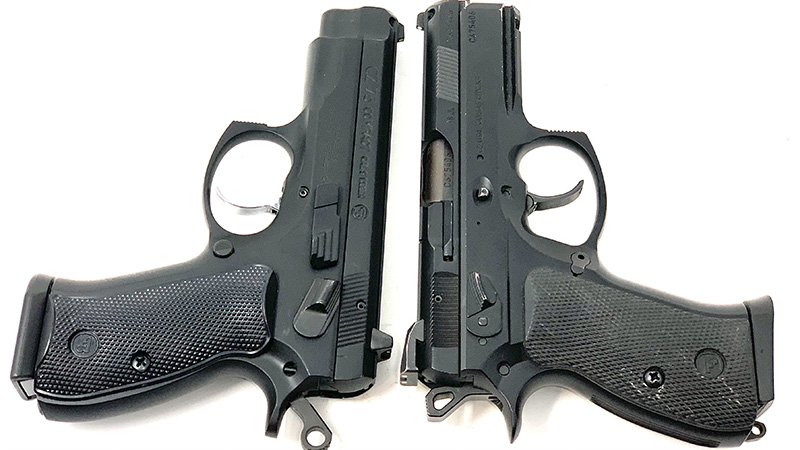 Hands down the CZ 75 Compact is the better shooting gun. The weight of the frame really makes a difference here. If you get the opportunity to shoot one you’ll know what I mean.

All of these guns are priced at $646 MSRP so the value is identical. What features are most important to you will dictate which gun offers you the most value.