In this comparison, we’re comparing the Sig P365 vs Taurus G2. Right off the bat, these guns are in completely different price points and are sized slightly differently. But they’re close enough in size. They’re definitely worth taking a look at to see which gun is the better option for you.

Both of these guns have their own pros and cons, and there isn’t a one size fits all answer. So we’re going to take a look at all these details. Hopefully, you’ll find the information, so you can make the right decision on your purchase.

Both of these guns come in at a very similar weight. The Taurus weighs an ounce and a half more than the Sig P365 unloaded. But loaded, it weighs almost four ounces more. That is with the two extra rounds of ammunition it carries. You’re going to get 12 rounds of ammo in the Taurus G2C.

So when comparing the Sig vs Taurus G2 to see which gun is easier to conceal. It’s pretty obvious the Sig P365 is going to win here. But that is not the only item we’re discussing in this comparison. There are other features of the gun, which may make one of the others a better choice for you. 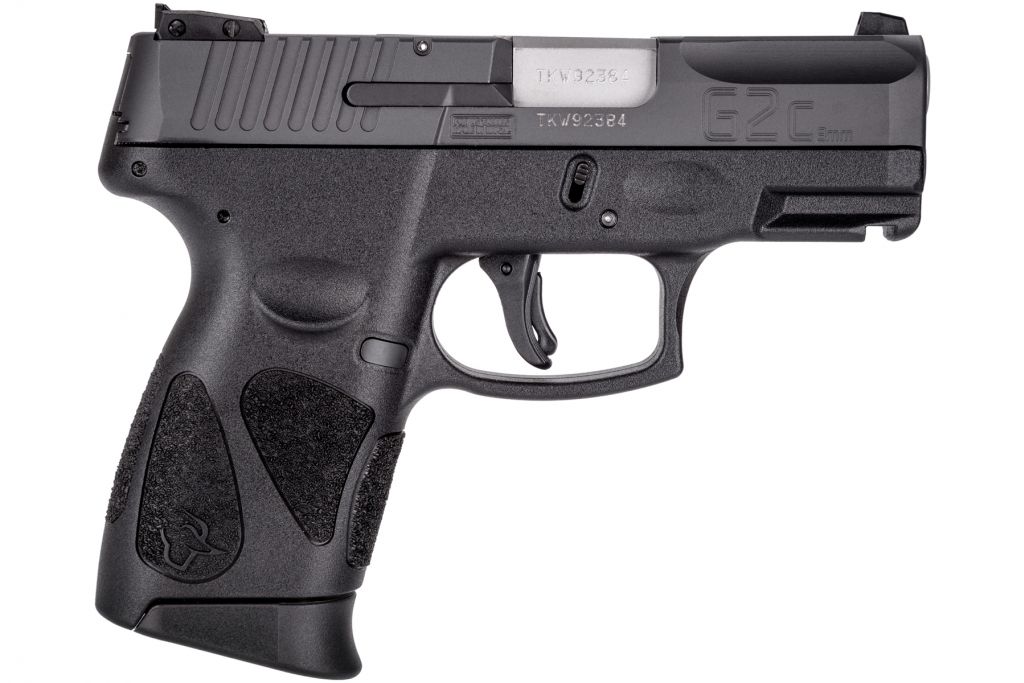 You’re going to get 10 rounds of ammunition in the Sig P365. The length of the gun from the top of the slide to the bottom of the grip is also longer in the Taurus G2C. Coming in at over a half an inch longer. The Taurus G2C is also around a 10th of an inch wider than the Sig P365. That doesn’t seem like a lot, but that’s also 10% wider. When you look at the overall dimensions of the gun that’s more of a difference than you would think.

The frame on the Sig P365 is just long enough that I can get all my fingers on the grip. My pinky hangs one half to one quarter off the end of the grip with the magazine inserted, so it’s hanging right off the base plate. This is really impressive for a gun that’s so small.

The magazines on the Taurus G2 only come from the factory in an extended version, which adds a lot of length to the gun. But it also gives you a little more grip. I would like to see extended magazines instead of just an extended base plate, as it’d be nice to get an extra round or two at capacity in the firearm for the added length.

With the extended base plate, I’m able to get all my fingers on the grip of the Taurus G2. That is going to give it a slight advantage over the Sig P365. But one thing to keep in mind is that extra grip on the gun is coming at the cost of an overall taller firearm.

The texture on both of these guns is absolutely really good for what they are. The Taurus texture is a little bit grippier on the sides. And when you grip in the hand, they seem to have the same amount of texture. But the texture on the side of the Taurus grip could cause you slightly more discomfort when rubbing against the skin. Due to this, I’m going to have to say you get better texture on the Sig P365 vs Taurus G2. 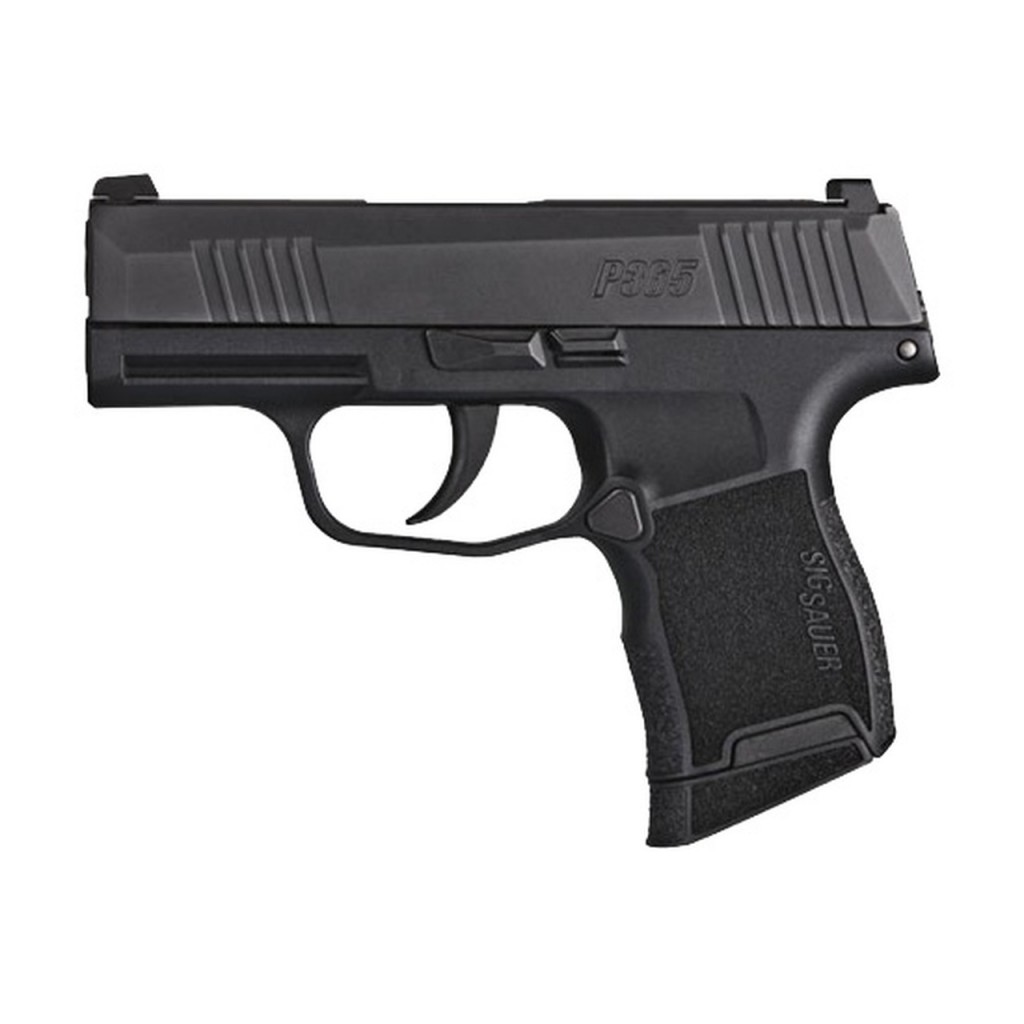 Manipulating the slide on these firearms is pretty easy, at least for myself. But I handle firearms a lot, so I might not be the best person to ask. You’re going to want to go to your gun store and try to manipulate slides on both of these firearms yourself to see if it’s something that works for you.

This is a no-brainer. The Taurus G2C comes with plastic sights, and there aren’t very many aftermarket options. The Sig P365 comes with an absolutely fantastic set of stock sights. It comes with siglite sights, and the front site has a bright green ring around the front sight. That makes it very easy to pick up during daylight. They aren’t as good as something like the Trijicon HDs or AmeriGlo sights, but they’re a great stock option.

Having standard Sig cuts, there are a ton of aftermarket options for the Sig P365. So it’s no comparison. The Sig P365 wins versus the Taurus G2 when it comes to sights.

There is no external thumb safety on my variant of the Sig P365. It is available in an ambi version. The Taurus G2, on the other hand, only has a left-side mounted safety set for a right-handed shooter. So if you’re going to buy the Sig P365 with a safety, I am going to give that the advantage over the Taurus system.

My biggest gripe with the Taurus’ safety is that it’s not ambidextrous. Overall, the safety has actually functioned very similarly from a user perspective. But if you don’t like safety, just get the SIG P365 without the safety, as I did.

Now, this is always a subject up for debate, and it really comes down to personal preferences. The trigger on the Sig P365 has a nice rolling break. From the start, you’re going to feel a little bit of a little very light take-up before you begin to feel creep. And once you feel that creep, the trigger is going to go into a rolling break that is predictable.

But keeps you guessing if you’re going very slow. You can definitely make the trigger go off when you want it to. But if you’re taking your time on a long, precise shot, you can slowly pull the trigger and still be surprised when that trigger breaks.

The Taurus G2C trigger is a unique design because it has restrike capability. But that is only an advantage if the primer doesn’t go off. So we won’t speak about that a lot. It’s a feature you may want, but it’s a feature that I don’t think is necessary. Your mileage may vary.

Now the trigger on the Taurus PT 111 G2 has quite a bit of take-up. Honestly, it feels like it goes back really far. The trigger reach on this gun is fairly short for its size. Once you press the trigger to the wall, you feel a wall before the trigger breaks and it feels plastic-y. The trigger isn’t bad at all. It’s not great either, but it’s really good considering the price point of the Taurus PT111 G2.

The magazine release on both these guns is very easy to reach, and you won’t have any issues. There’s not much more to say than that. Both guns feature reversible magazine releases, which is a nice touch.

Believe it or not, the frame on the Sig P365 just doesn’t feel to be that high quality. That said, it’s still better than the feel of the Taurus. The SIG P365 just seems like a much higher quality to get when you feel it. The fit and the finish are much better, and the materials seem better as well. Steel sights versus plastic sights, the list goes on. You’re looking at a gun that costs almost twice as much. You have to give the edge on quality to the SIG P365.

I personally don’t find the Taurus G2 to be that attractive of a firearm. The Sig P365 XL is very proportional. So I’m going to have to give the win to the Sig P365 XL. But this is all opinion. Your mileage may vary.

Believe it or not, the smaller SIG P365 shoots slightly better than the Taurus G2. It really surprised me. Sig did an amazing job with the recoil system on the P365. When comparing the Sig P365 vs Taurus G2 at the range, you’re probably going to have better luck with the Sig P365.

Unless you have absolutely huge hands, in which case the Taurus might win for you. The slide and action on the Taurus just seem to have a little more recoil than the Sig P365. It doesn’t shoot as softly. The sights are also much more pleasant to use on the Sig P365. But Hey, you’re looking at a gun that costs twice as much, so you have to take that into account.

The price difference when comparing the Sig P365 vs Taurus G2 is drastically different. You can find the Taurus PT111 G2 for $225 while the Sig P365 is over twice as much as $499 MAP(minimum advertised pricing).

That said I’m going to give the guns a tie on value. Their sights and overall quality are much better on the P365. But it’s over twice the cost. If you have the money the Sig is most likely worth it. But if you have to save a while longer to buy a Sig then you might be better off buying the Taurus.