If you’re comparing the CZ P01 vs P07 you’re probably already a CZ fan. Both of these guns are double-action single-action like the original CZ 75 but they have different frame materials. The CZ P07 has a polymer frame while the CZ P01 has an aluminum alloy frame.

Besides the frame, the trigger systems are also different. You can get the CZ P01 in with a standard CZ 75b trigger or with the Omega trigger system. The CZ P07 comes with an Omega trigger. We’ll cover both P01 variants in this CZ P07 vs P01 comparison.

Looking at the chart you’ll see the guns are near identical in weight and size. It’s a common myth on the internet that the P01 is heavier since it has a metal frame but the scale doesn’t lie and the weight is nearly identical.

The CZ P07 is a fifth of an inch shorter than the CZ P01 and it’s quite a bit thinner in the grip of the gun so it’ll be slightly easier to conceal for some body types. This will only be an issue if this size gun is the absolutely largest gun your body type can conceal. Another thing to mention is the thickness of the grip varies with the contour of the grips on the P01 so the extra width isn’t as noticeable as it would be with a square shape grip like the CZ P07. 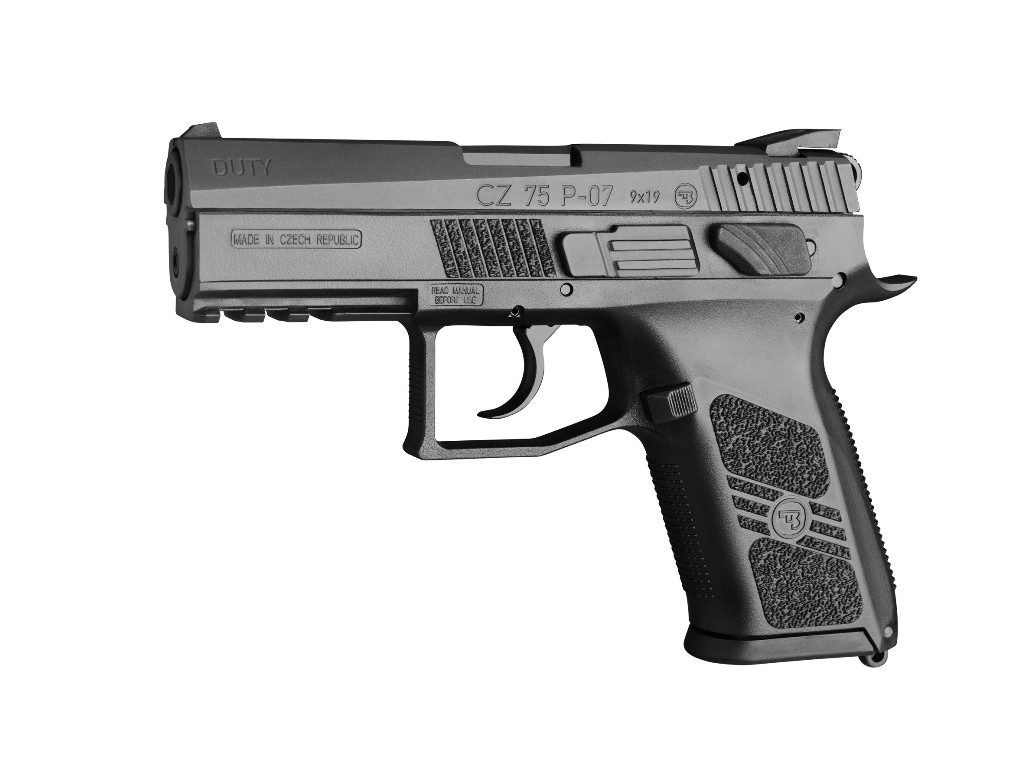 For its size the CZ P07 can hold a little bit more ammo if you buy 16 round magazines. 15 round magazines are the most common but you can squeeze in that extra round with the right magazines.

If you’re familiar with the CZ 75 then you know it’s regarded to have excellent ergonomics and the P01 is no exception. Due to the magazine being shorter the grip of the P01 is also slightly shorter than the 75 but besides that, the ergonomics are nearly identical. It has removable grip panels that you can replace with a wide variety of aftermarket options so you can choose different contours on the side of the grips from thin to thick. 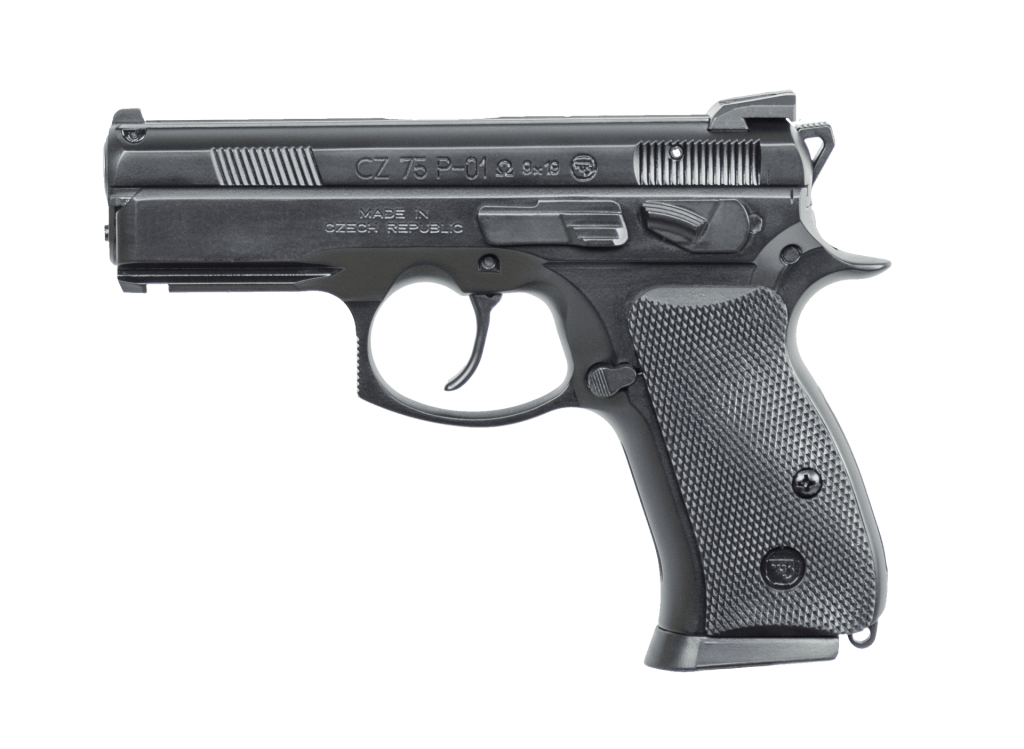 The CZ P09 has different ergonomics from the P01 and CZ 75 and feels more like a narrow 2×4 that has the edges rounded. It’s not uncomfortable but it just doesn’t fill your hand the way the P01 does. You can switch out the back straps and change the amount of hump in your grip but it doesn’t change your trigger reach distance.

When comparing the CZ P01 vs P07 grip I think the CZ P01 is the clear winner for most people. It’s just a more ergonomic grip.

Texturing on the CZ P01 is the grip panels and vertical lines on the front and backstrap. With the stock panels and the milled in lines on the frame, they do a good job of providing sufficient texture. You can choose more or less aggressive grips if you desire a different level of texture. The stock grips are what I would describe as medium texturing.

On the other hand, the CZ P07 grip is pretty slick and the texturing on the sides of the grip and the front and backstraps are all slick making the P01 the winner. If you want your P07 to have more texture you can add sandpaper or rubberized grips but those tend to fall off with regular use so a custom stipple job is your best bet. If you want to modify the P01 grip range from $20-$140 and you don’t have to permanently modify the gun.

Both the CZ P01 and the CZ P07 use internal frame rails to hold the slide on the gun so in theory the slides should be similar but in reality, the P07 slide is an eighth of a wider and that makes all the difference in the world. The frame on the CZ P07 is also the same width as the slide whereas the P01 frame is much wider so the slide is harder to access. The forward and rear serrations are also easier to grab onto due to the chamfers on the CZ P07 slide. On the CZ P07 vs CZ P01 slide, the P07 is a clear winner.

Both guns Come with CZ sights that have the same sight picture. CZ does offer some night sights with a near identical sight picture. All of the sights are acceptable but they aren’t great. If you’re buying this for a range gun they’re fine but if you plan to use it for self defense then you’ll likely want to get better sights.

Aftermarket options for the sights are near identical as well. The P07 seems to have a couple more options from night fision and trijicon. So The P07 edges out the P01 on this one.

The CZ P01 has a safety and no decocker. You’ll find the safety mounted on the left side of the gun in the ideal position for a right handed shooter. If you want to decock the gun you’ll have to do it manually and that poses some risks.

Since they both use the Omega system the P01 Omega and CZ P07 use the same setup if you’re comparing the CZ P07 vs P01 Omega then the result will be identical. You can mount either a safety or decocker and they’re both ambi making them ideal for a left handed shooter.

Again the guns using the Omega system have identical triggers and the CZ 75b series trigger the normal P01 uses is quite a bit different. So instead of comparing the CZ P07 vs P01 I’m going to compare the 75b trigger vs the Omega Trigger.

There is no way to describe the 75b double action trigger except incredibly smooth. It is a little bit heavy but it’s super smooth. Now the single action isn’t’ quite as good and it’s a little heavy as well but it’s serviceable. There are a variety of aftermarket options to make the trigger even better.

The Omega trigger has a straighter trigger shoe and a lighter double action pull but that pull is a lot less smooth than the 75b trigger. Surprising the single action trigger on the omega system is a little cleaner and lighter than the 75b trigger. There are also some aftermarket options to improve the trigger.

The slide locks on both guns are in an identical location and they’re both hard to reach with your primary hand. They sit fairly far forward and the decocker/safety further block your ability to reach the trigger. As a right handed shooter you’ll likely have to drop the slide with your support hand thumb after inserting a fresh magazine.

Again the magazine releases are positioned near identical. The P01 has a more traditional round shape and the CZ P07 is a square design. They both work the same.

The P01 just feels like a higher quality handgun in my opinion. The ergonomics come into play and probably provide some bias that helps me form this opinion but the P07 just feels cheaper than the P01.

Both of these guns have a similar aftermarket. The CZ P07 has a few more sight options but besides that, I’d say they’re on par if you aren’t taking grip options for the P01 into account. I guess you could say it’s a tie.

When you’re judging the looks of the CZ 75 P01 vs P07 it’s not a fair comparison. The CZ P07 is a fairly modern looking gun while the P01 is much more classic. I personally think if you’re judging the P07 as a modern gu and the P01 as a classic the P07 gets a higher score. The slide on the P07 looks great and everything is proportional while the P01 lacks some of the grace in its stock format. If you

Both of these guns shoot very similarly. They’re the same size and weight so they perform as such. The triggers are similar so there really isn’t a difference for most users.

You can purchase Mec Gar magazine for the P01 and they are the OEM for CZ but they come in at almost half the price. CZ magazines are the only options for the CZ P07 and they run twice the price of Mec Gar P01 magazines.

So if you’re like me and you buy a lot of magazines for your gun then that’ll bring the cost ownership a lot closer to a similar level. Overall it’s hard to argue that the P07 is probably a better value than the P01 for most people. But the P01 does have an aluminium frame that’ll increase the value for some like myself.

If price isn’t a consideration I’m choosing the P01.