A concealment claw, holster claw, or holster wing is a device that uses the pressure from your belt or waistband to leverage the grip of a gun closer to the to closer to the body when you’re using an AIWB Holster with a claw.

It can be used to carry at other positions but before doing that there are important aspects you’ll want to take into account that’ll we’ll cover later.

The holster claw or concealment claw in its modern format was originally brought to market by Raven Concealment Systems as an accessory for the VG2 variant of their Vanguard holster line.

This modern format is an L shaped device that attaches to the holster via mounting holes drilled under the trigger guard with a built-up portion on the long portion of the L on the holster claw sits parallel to the slide of the gun. Some people call them wings and other people call them claws but the term is interchangeable for most of the holster market so you’ll see with Concealment Wing and Concealment Claw used in this article.

Raven Concealment was not the first company to have an IWB holster with a claw feature. Originally concealment claws weren’t injection-molded holster claws but were an integrated portion of the holster shell.

The lineage of who actually developed this innovation is a bit unclear but companies such as JM Custom Kydex and Keepers Concealment were both offering these types of enhancements as early as the mid-2000s but I’ve heard of companies doing built-in grip concealment claws in the late 90s. The feature could have very well been implemented in leather holsters or earlier IWB concealment holsters. 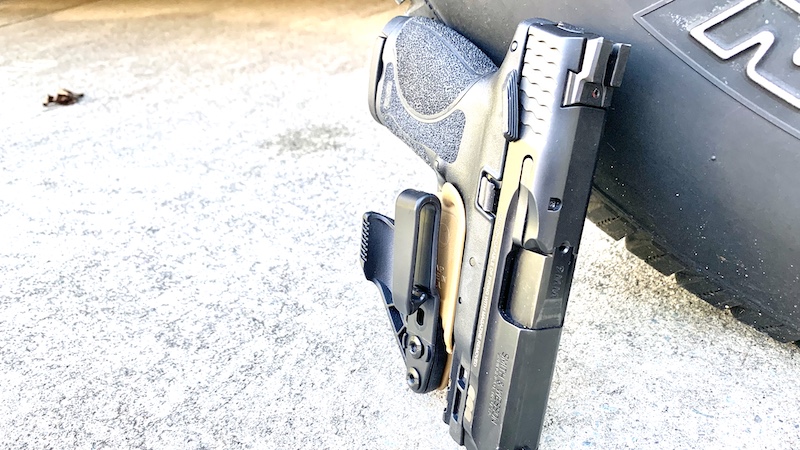 When Raven introduced their VG2 holster kit that included the VG2 Wing it was the first IWB holster wing that was commercially successful. Originally Raven Concealment started selling their holster claw exclusively with the VG2 and as a VG2 add-on accessory.

Eventually, Raven Concealment realized the market for aftermarket accessories was substantial and they started offering the holster claw for sale to other holster manufacturers.

Before Raven Concealment started selling direct holster makers tried making their own IWB holster Wings. The VG2 holster claw was an injection molded nylon claw that requires a very expensive mold to manufacture. To justify the cost of the mold you have to be doing a massive volume that is much larger than most holster makers do.

When they realized that injection molding was off the table a lot of companies used Kydex to design IWB Holster concealment wings. Most of these would work okay for a short period of time but broke with regular use. If you see a company that is still making a Kydex holster with a claw made of Kydex realize there might be long term durability issues.

With Raven’s success selling the VG2 other companies saw an opportunity to offer other options to the market. We’ll go over each of those below.

Best AIWB Holster with a Claw

Often people don’t know what their requirements should be because they don’t have enough experience with IWB holster concealment wings to understand what will work for them.

Can you use a Kydex holster with Wing for 4 o’clock?

You can technically use a holster claw for AIWB but it adds a lot of bulk in that area. Carrying a concealment holster at 3 o’clock is a bad idea. That area of the body has the highest tension on the belt and thus the holster.

The holster and claw combo is often much wider than your hip. For a holster wing or holster claw to be effective you have something to press the grip of the gun into.

The hip at 3 o’clock is fairly flat and your body curves substantially where the flat part end so a claw will just push the slide further out while not pushing the grip in far enough to improve concealment. Hip bones often don’t have much meat covering them in that area so it’ll feel like your holster and claw are direct pressings into your hip bone. You’re more likely to hurt both concealment and comfort than to help it.

If you can conceal a gun fine at 3 o’clock fine then a claw will not improve that ability. Now if you move the gun back to 4 o’clock you’ll have a much wider area to place the gun against and a claw can be effective if you’re carrying with a 0 degree or very slight cant. You’re still adding a lot of bulk to the holster and in that position, it’s a lot harder to but your Kydex holster with a wing on than it would be when carrying AIWB.

You can often get the same or better level of concealment by canting your holster forward so the grip of the gun sits against your love handle. Not only is it a lower profile and easier to put on but it also makes it easier to draw the gun from the holster due to the natural angle of your arm to when reaching behind the hip.

What is the best claw for you?

We’re all shaped a little differently so when shopping for a holster with a claw the claw you choose plays a big role in comfort and concealment for your body type and AIWB holster setup.

The good news is all of these claws use a similar or the same mounting pattern that the original Raven Concealment VG2 Wing used. We hall different requirements and if you know what those are it’ll help you determine what is the best claw for you.

Things to Consider When choosing a Holster Claw 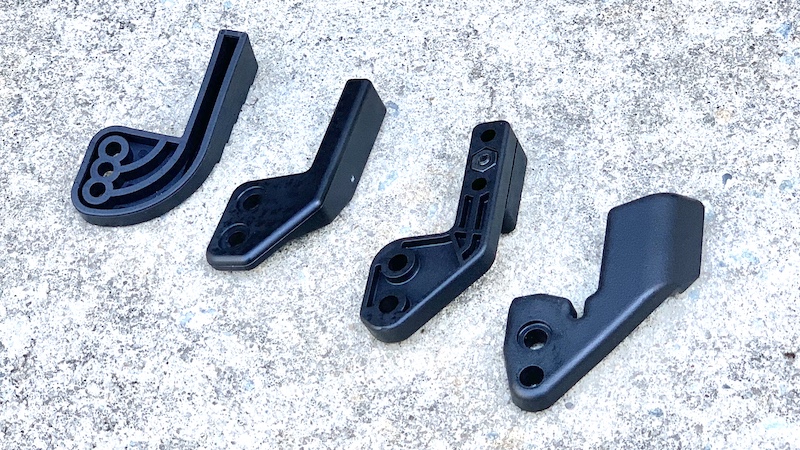 All body types are different but for the most parts humans have an oval-shaped waistline and they’re trying to conceal a flat gun against a curved surface. When carrying in a concealment Wing Holster there are two areas you have to be concerned about printing that is affected by the claw. Those areas are the bottom of the grip and the top of the slide or your red dot optic.

Most people have issues with the grip of the gun printing, not the slide or red dot optic but once you add a holster claw into the equation you can torque the grip too far into the body then you’ll start pushing the slide out.

If you measure the distance on the gun from the top of the rear sight or red optic to the magazine base pad let’s say it’s theoretically 6 inches. Now, look at the area of your stomach you want the gun to sit flat on and measure it. Let’s say the actual flat area is 5 inches wide. Ideally, you’ll want the gun to have ½ inch of overhang at the grip and ½ at the sights.

This might change slightly depending on the curvature of your stomach and your clothing cut. Another thing that comes into play here is belt tightness. The tighter your belt fits the more it’ll torque the but of the gun into the body and the sights/red dot away from it. So you have to find that perfect balance for optimal concealment. 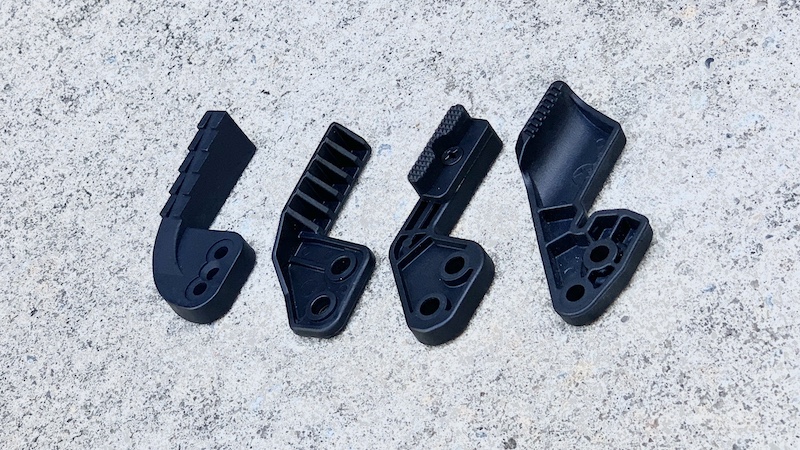 The most important thing to take into consideration is clothing. With a good holster claw setup, most body types can conceal a reasonable size gun without having to resort to oversized clothing. That said if you’re wearing a shirt that shows your 8 pack abs or the bottom of your belly thorough the shirt no holster out there will conceal the grip of a 1-inch wide gun.

A good concealment claw holster combined with a good belt will hold the gun in tight to your body but the width of the gun will still be extending out from your body so you need to make sure your shirt is contained enough room to not press against the gun. There are creative angles holster manufacturers used when taking pictures to show people wearing medium shirts concealing large guns and they are concealing them well from that angle. Change the angle up and it’ll be obvious they’re carrying a gun. 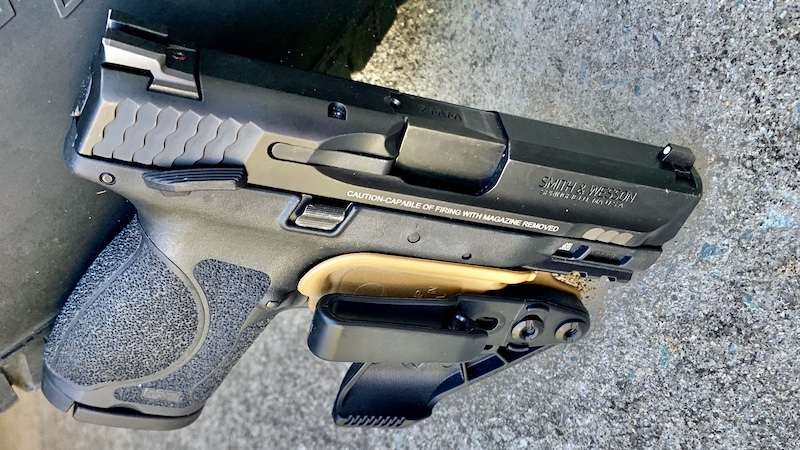 The Raven Concealment VG Wing is the OG AIWB Holster Claw. It was designed for the top hole to be .75 inches from the bottom of a Glock 19/17 trigger guard with .6 inches distance between the mounting holes.

All other common non branded holster claws use the same mounting pattern. A big downside for holster makers using the Raven Concealment Claw before there were other options was the supply chain bottleneck. It wasn’t uncommon for the holster claw to be out of stock for weeks or months and there was always the fear that Raven Concealment would stop selling it and months of revenue could be lost in the time it took for an alternative to being launched by someone else. 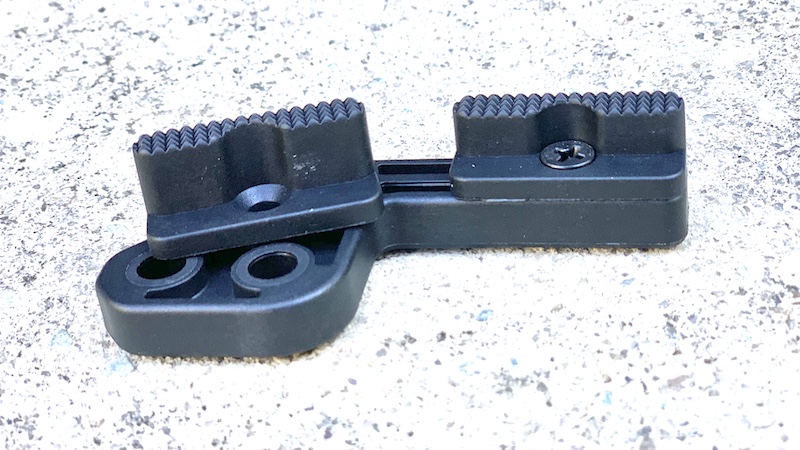 The Mod Wing was the next holster claw to come to a couple of years after the Raven. Index Fasteners also are known as IFI is one of the biggest suppliers in the industry.

A big selling point for the Mod was was it ambidextrous reducing holster manufacturer’s need to stock RH and LH holster claws. Another unique feature was the two claw inserts the mod wing came with that allow you to adjust the amount of leverage the Modwing has.

The downside of this design is multiple pieces can be lost or come loose. When these are shipped they only ship with the necessary parts and no extras and there is no option to order extra parts.

You can order the screws and nuts from Fastenal or McMaster but the shipping cost will exceed the cost of a new Mod Wing at full retail price so if you lose parts just plan on buying a whole new unit. 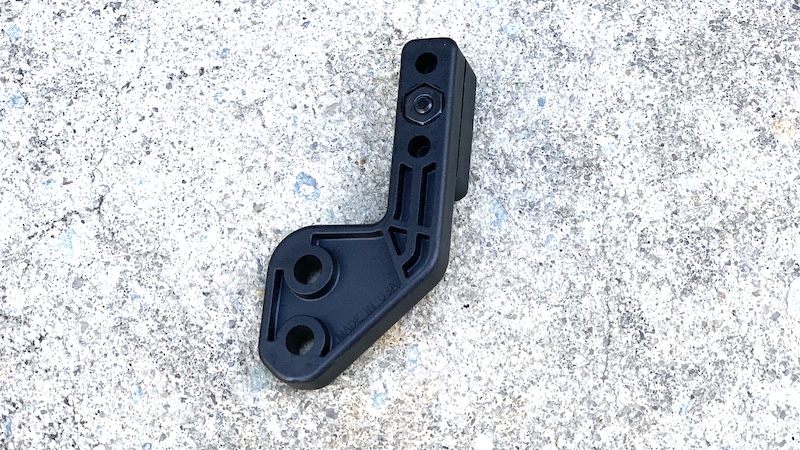 There is good texturing on the claw portion so it doesn’t slide around against your belt. The downside of that texting is if the claw slides under the belt it can be quite difficult to move it back up. The ambidextrous design also means the shape of the L piece is quite sharp so if you’re carrying very close to the thigh this isn’t the most comfortable claw. 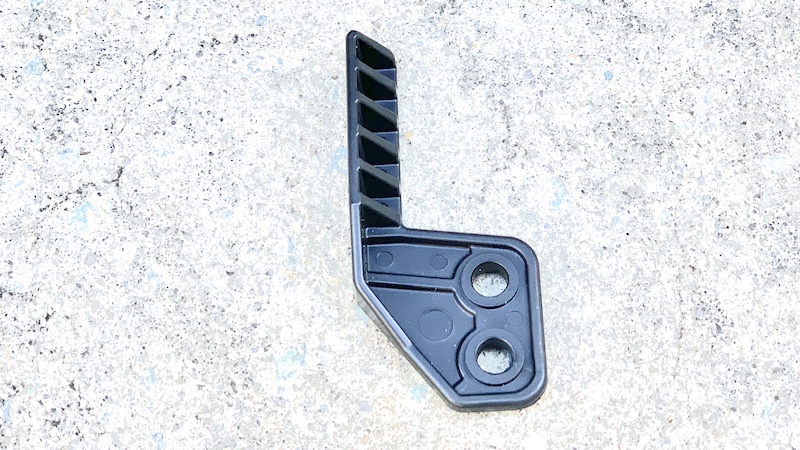 DIY Holsters is one of the major suppliers of materials for the holster industry and was the exclusive distributor of the Raven VG 2 holster wing for a long time and they saw the supply chain issues and decided to develop their own claw to ensure IWB holster manufacturers would have a steady supply of holster claws. There is nothing special about the DIY Holster

Tom Kelley the owner of Darkstar Gear has been making holsters since the late 2000s and he’s one of the few people in the industry that actually try to improve designs and come out with innovative evolutions like the Dark Wing. The Darkwing is the newest offering in the holster claw market and likely the most innovative from the user’s perspective(the mod wing’s inventory simplification might wing for holster manufacturers). 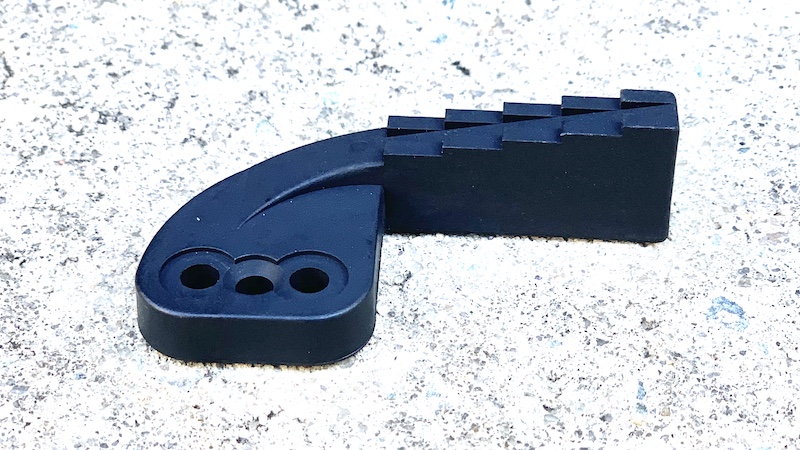 There is a steep angle on the claw portion of the Dark Wing so when it contacts the belt it helps push the grip of the gun back into your body giving you a similar effect to a holster wedge. For smaller guns, it’s not as necessary with most body types but with larger guns, this is a clear advantage over the other current offerings.

The biggest downside of the Dark Wing is that if the back of the holster wing touches your thigh the backside of the Wing is somewhat sharp like all of the other wings with the exception of the Raven. That said we can sell any wing we can’t and they’ll have a similar manufacturer cost and we choose the Dark Wing because we feel it’s the most effective overall. 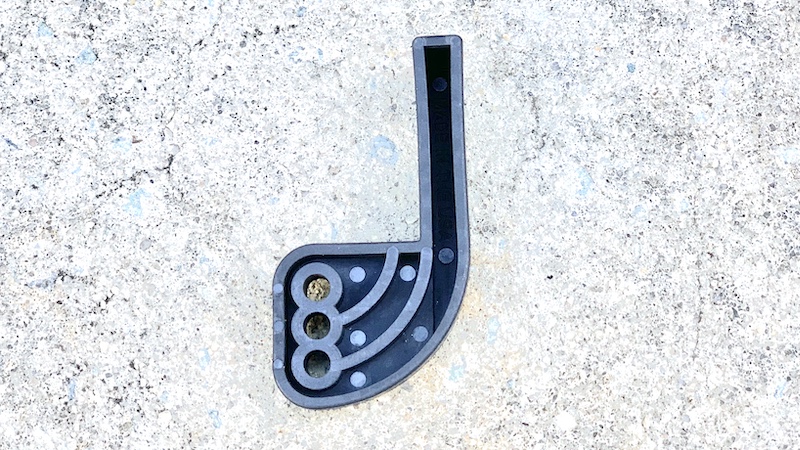 One Reply to “What is a Holster Claw?”