Sig took their failure with the Sig P250 and redesigned it into the Sig P320 line. The Sig P320 is a striker-fired handgun that is now the official firearm sidearm of the US Army in the M18 variant. With the Sig320 success on the military and law enforcement market, they also have quite a hold on the civilian market.

Their most notable feature is the frames. Sig designed the frames completely differently than the normal Sig P320 frame. They feature a large beavertail that allows you to get a little bit higher grip on the gun, and the ergonomics are more Glock-like, allowing the shooter to get more control over the firearm. The X Carry has a 3.9-inch barrel and also comes standard with an optic cut. Those are just some of the items that set the gun apart from its Sig P320 brethren. 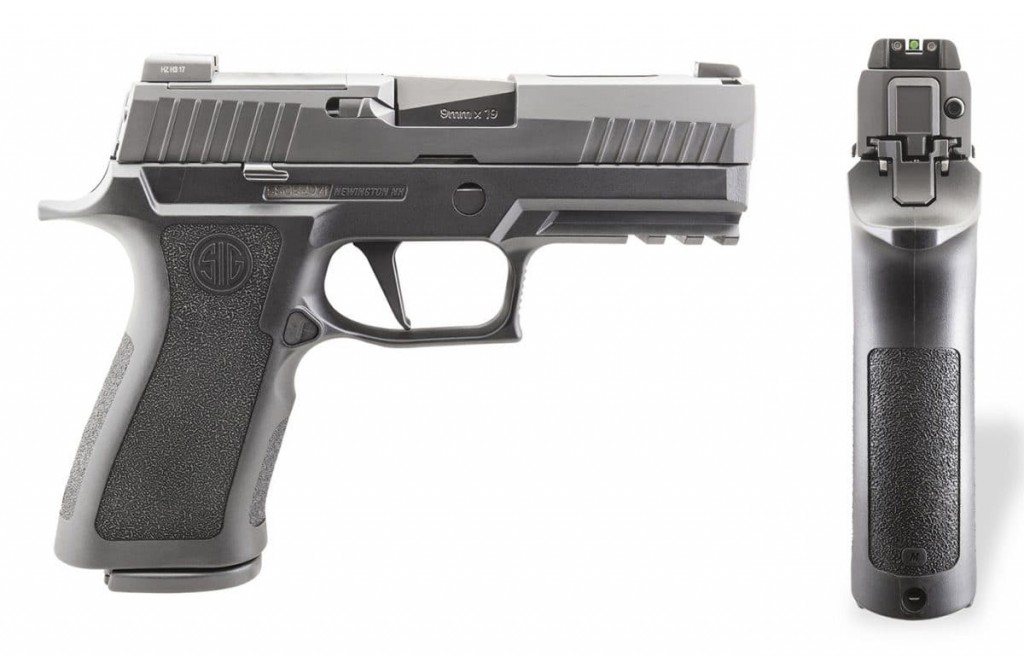 But, besides that, there aren’t many aftermarket options and one disadvantage of the Sig design is you can only buy the magazine straight through Sig themselves, and they aren’t cheap running between 38 and $45. The good news is that the magazines are offered with various baseplate colors, including black and FDE.

There’s a nice bevel at the bottom of it, and while not as good as a Glock 19 Gen 5 MOS, it’s probably the second-best Magwell in the striker fire category. I really don’t have any complaints about the system, and it is a cut above the rest minus the Glock.

Sig P320 X Carry frames will run you around 45 to $50 and they are readily interchangeable. They only make the X range in the medium size and not in the large or small sizes. That means you don’t really have that many aftermarket options. You can always switch the frame to a standard Sig P320 carry or compact frame or a Sig P320 X Compact frame.

But, there aren’t a lot of options outside of that. If you want to try stippling the frame yourself or have the frame send out to be stippled, it’s nice that you don’t have to send the entire gun off when doing so, and you can send it straight through a post office and don’t have to use an FFL since the frame itself is not a registered part of the firearm.

That said, I shoot the Sig P320 X frames way better as they allow me to get my hands in all the right places to get leverage and control the gun under recoil. There is sufficient texturing on the gun on the front and back strap and the side straps. It’s not great, but it feels kind of like that not very aggressive sandpaper. It’s enough to keep your hands in place, but it’s not going to bother your hands at all.

Frankly, it’s the bare acceptable minimum amount of traction you would expect on the grip of a gun, better than a lot of options, but not as good as some of its competitors like this CZ P10. C, which has the best factory texturing on the market. Overall, the general feel of the gun is good, and it’s a gun that you can really control well, which is my favorite feature.

The gun isn’t going to win any points over the same P320 in general hand feel, but as far as control, you seem to be able to get those fingers in all the right places to keep the gun still while firing it.

The rear sight on the Sig P320 is mounted to an optics plate, and that side has two tritium vials at the rear with no coloring around them. So, they provide a nice black sight, nice black rear sight with a high contrast front sight during the daylight.

So, all you can really do is replace the optics cut cover with an actual red dot. In my opinion, this is way superior to having a nice rear iron sight. The Sig Romeo1 actually has a notch built into the rear of the gun for a crude iron sight picture that does seem to work with the front sight.

Your elevation will likely be a bit off, but it definitely keeps your horizontal string of fire where you want it to be. So, as backup, iron sights will work, especially if your target is up close in a self-defense situation. Hopefully, you’ll only need your Sig P320 backup iron sights if the dot fails, but the dot is unlikely to fail.

There are no external safeties on the Sig P320 X Carry. There isn’t even an external trigger safety like most other guns. The trigger itself is somewhat lighter than most other striker-fired guns as far as the trigger shoot, not the trigger pull.

So, in theory, this helps the gun be drop safe because the trigger should not continue to travel with momentum like many other heavier triggers might when dropped. I’m still a little bit iffy about this. But that said, in my testing, I haven’t found any issues, but I haven’t exactly dropped the gun onto a hard surface from a high height either.

The Sig P320 X Carry magazine release is located in a standard push-button position for most guns. The nice thing about the magazine release is I can just hit it with my thumb without breaking my grip. I have medium to large-sized hands, and anybody with hands smaller than me would not be able to do so.

That said, it’s straightforward to readjust your grip even if you have to break it and continue firing once you’ve reloaded. The magazine release itself is reversible to the other side and it’s frankly an excellent design. Edges are well-rounded. There’s nice texturing on the front of it and I can’t think of any way Sig could do better for a factory gun.

You could put an extended slide release, but there’s really no reason for it to be any more extended or any more recessed. I think Sig did an excellent job on this feature.

Personally, I really like it, and I think it’s well-positioned. Unless somebody has tiny hands, they’re not going to have an issue with this design. Overall ergonomics. Overall ergonomics of the Sig P320 X Carry are excellent unless you have super large hands.

So, the slide and a major portion of the frame keep your grip from getting that high on the gun. While this is not a deal-breaker for many, it is something you have to take into account. This gun fits my hand, similar to how a Glock 19 would despite being much larger. So, if you’re looking for the most efficient concealment gun that you can get your hand on, this might not be the best choice for you.

The Sig P320 X series ship with a flat-faced trigger, and it’s really nice to touch. It works really well, and it’s ergonomic. The trigger itself is nothing special, and it’s pretty much a standard striker-fired trigger. From the beginning of the trigger pull, you’re going to feel a little bit of very light take up that’s very short, and then you’re immediately going to hit a wall, and from that wall, you hear creep, creep, and more creep until you get a very rolling break after around three portions of creep.

Every trigger is going to be a little bit different. But, the trigger pull itself is fairly short and from the reset, you’re pretty much immediately come back to that wall before filling the creep again and finally going into the rolling trigger break. Again, the trigger is good. It’s a great self-defense trigger. But, if you’re a trigger snob, you’re likely going to want to replace it with parts from great guns.

Cleaning the Sig P320 X Carry is fairly easy. You’ll need to take out the mag, ensure the gun is clear, lock the slide to the rear, and then rotate the takedown lever down 90 degrees. The lever can be a little bit hard to turn at first, but eventually, it does break in.

Drop the slide forward, and it comes right off without deactivating the striker by pulling the trigger. So, this gun can be completely taken apart without pulling the trigger, which is a nice feature for many people. The system itself is also straightforward to get inside and clean. I have no issues with the Sig P320 system, and I think it’s a brilliant design as far as modularity.

Overall, the Sig P320 X Carry aesthetics are second to none in its class, in my opinion. The X Carry laser etching is a little bit gaudy. Besides that, the forward and rear serrations look great. The frame itself is attractive. Overall, I just really liked the look of the gun. One of those things, I could see how some people could think that polymer on the frame seemed a bit cheap, and it does feel a little bit cheaper than other guns. But, overall, the gun does look good, especially from a distance.

Shooting the Sig P320 X Carry is a dream. The gun has an extremely light recoil impulse. Now, the recall on the gun is light as far as felt recoil, but the gun seems to cycle a little bit slower than something like a Glock, and it does have more muzzle rise. But, for newer shooters, this might be a great centerfire gun to start with, as the recoil is a lot more approachable than something like a Glock 19 that seems just a little more violent to the shooter.

I really like the Sig P320 X series, and frankly, the gun shoots itself. It’s so easy to shoot. Honestly, if there’s any gun that I could see replacing my Glock 19, it would be the Sig P320 X Carry. That said, the overall size is similar in size to a Glock 17 makes it a hard choice to do so, with the Glock 19 being just a little bit shorter and giving me a little more room for error in concealment.

I like the Glock 19 a little bit better than this gun due to the size and usable grip length. But, if I can get the size of the Glock 19 with the shoot-ability of the Sig P320 X Carry, I would choose the X Carry all day long. For those with Smaller hands, check out the Sig P320 X Compact.

A standard sig cut sight will work for the front sight, but due to the rear sight being mounted on the Optic Cut Cover, there are no current aftermarket sight options for that setup.