There are a lot of differences between the M&P Shield vs Glock 19. But there are not a lot of similarities. They are both nine-millimeter and very popular firearms common in the United States. Besides that, there are not many similarities. So we’re mostly going to be covering the differences in this M&P Shield vs Glock 19 comparison. But if you’re comparing these two firearms, this should give you all the info you need to decide which one is better for you.

Now, obviously, there are going to be a lot of size differences between these two guns. The Smith and Wesson M&P Shield with a flush fit magazine that holds seven rounds. While the Glock 19 holds 15 rounds with a flush fit magazine. The Glock 19 is almost half an inch longer in the grip or from the height from the top of the gun to the bottom of the magazine base plate.

So there’s a significant difference in size right off the bat. The Glock 19 is also almost a quarter of an inch thicker than the Smith and Wesson M&P Shield, plus it weighs six ounces more. But with that six ounces, you also get an extra eight rounds of ammunition. So if you’re trying to conceal the gun as easily as possible, the Smith and Wesson M&P Shield is going to be easier to conceal.

Now, one thing I will note is the muzzle on the Smith and Wesson M&P Shield is very short. Having a shorter muzzle, if you’re carrying the gun at the appendix position, is not an advantage like a lot of people think. If you look at the natural shape of the body, the muzzle of the firearm really doesn’t matter a lot when it comes to concealment, but the weight distribution of the gun does. With the Shield, a lot of that weight is going to sit above the beltline. This makes the gun very top-heavy since you don’t have a long slide to even that way out. 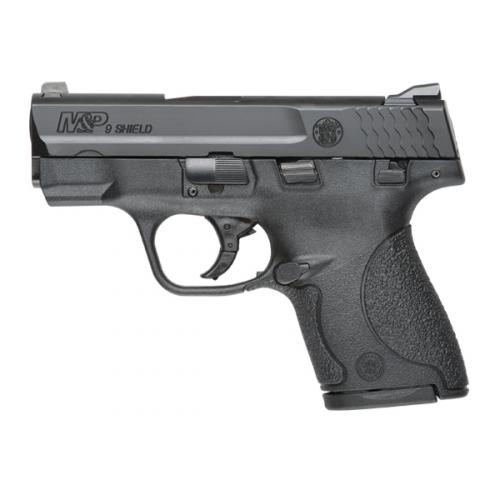 A longer holster will help a little bit as it spreads out the leverage from all that top heavyweight, but it won’t help completely. So if you carry an appendix, the Glock 19 might be a little more comfortable for a gun to conceal, but the Smith and Wesson M&P Shield is smaller and lighter. So it’s going to be a little bit easier of a package to conceal for most people. But, the Smith and Wesson M&P Shield will be a top-heavy gun that wants to tip out away from the body. So printing could be an issue if you don’t have the right holster set up.

Now, the frame of these two guns is about as different as they can be. The Smith and Wesson M&P Shield is very small and there’s no modularity built into it. Whereas the Glock 19 is currently produced in three generations, but the Glock 19 generation 3 guns have no modularity as well. 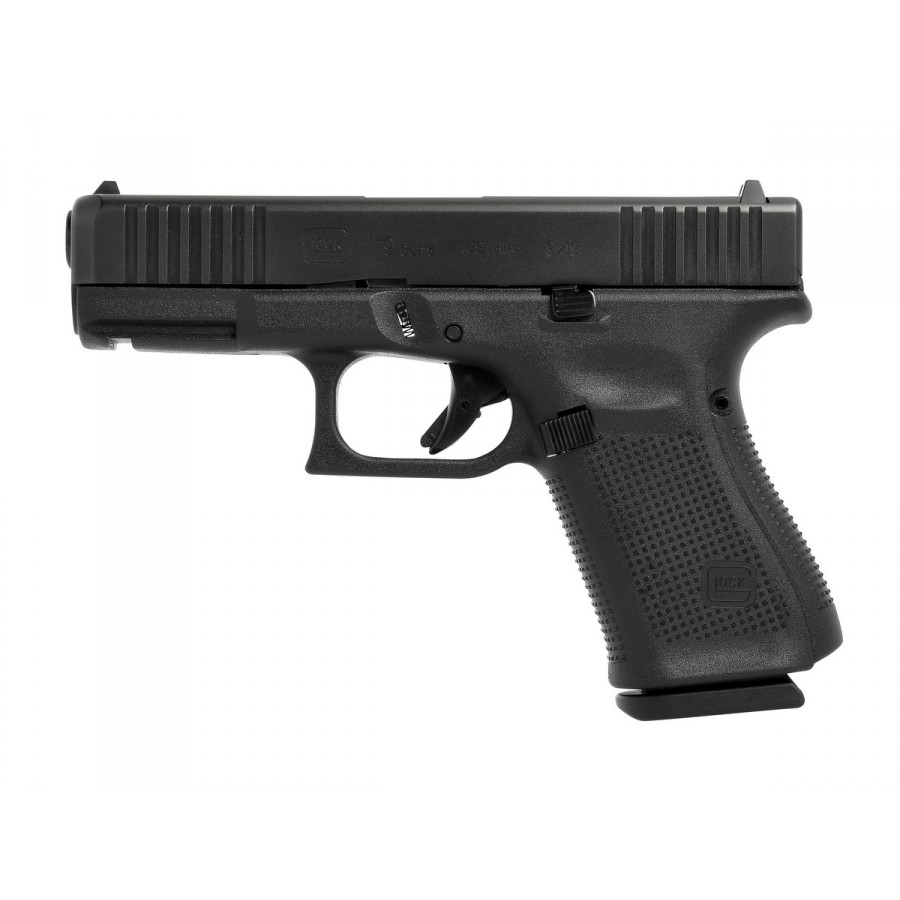 Now, when it comes to the feeling of the gun, the Smith and Wesson M&P Shield feels a little bit like you’re holding a one-by-four. The Glock feels more like a two-by-four the proportions in the Glock just feel a little better in my hand personally.

But the Smith and Wesson M&P Shield does work and it has a nice long distance from the front strap to the back strap. This does help a lot when shooting, but the gun just doesn’t feel as good in the hand. Especially when compared with more modern guns like the Springfield Armory Hellcat, or the SIG P365.

Now, when it comes to grip length, I can get my full hand, including my pinkie on the Glock 19. Whereas the Smith and Wesson M&P Shield, my pinky hangs about half the way off the gun. I can still get some leverage from that pinky, but it’s not quite as solid as the Glock unless I’m running an 8 round magazine. So that’s a major win for the Glock 19 and that’ll help shootability which we’ll talk about later.

It’s not great, it’ll work, but it could be a lot better. Now the texture on the 2.0 Smith and Wesson Shields is extremely aggressive. If you’re carrying it concealed, it might even cause discomfort when it touches your skin. And it could potentially cause your clothing to stick to the gun as well. It’s a very grippy and aggressive texture and it wants to cause things to stick to it.

So when you’re shooting, that’s great, but when you’re carrying the gun, that’s a major downside. So I think the Glock 19 is going to win in this comparison. Just because the generation 4 and generation 5 textures are a little more well-rounded. They will work for both concealed carry and shooting guns.

The slide on the Smith and Wesson M&P Shield has pretty good serrations at the rear. The 2.0 variants have serrations on the front as well, but they are only about an eighth of an inch tall. So they’re basically worthless. They’ll help slightly for a press check, but they’re not good for anything else. The serrations at the rear though, I really like, and I’m going to say they’re better than the serrations on a Glock 19. That said, the Glock 19 slide is slightly wider. So I do find that slide a little easier for most people to manipulate.

So sights are going to depend on the variation of the gun you get. Most of your Smith and Wesson Shields from the factory would come with standard metal, three dots sights. They’ll work, and they have a decent sight picture, but they aren’t great. If you’re using this gun for self-defense or you’re really picky about your sights, you’re probably going to want to switch these out for something better.

Whereas with the Glock, you can get the Glock with plastic slot fillers. This brings your cost of the gun down substantially, but they’re horrible as sights. So there’s something that I was just immediately replacing the sights on. Whereas the baseline Smith and Wesson M&P sights will work okay for the time being. Now, you can get the Glock from the factory with Ameriglo sights, which is a massive upgrade.

The Ameriglos have a blacked-out rear with two tritium vials on each side of the square notch. And they have a bright ring orange front that works great in the daylight as well as the tritium vial, which will work at night. So they’re a really good set of sights. If you want to get an awesome set of sight from the factory that you don’t have to switch out, then the Glock 19 is probably going to be the gun for you.

There are no safety officers on the Glock 19. The Smith and Wesson Shield does come with the option to get a thumb safety on the left-hand side of the firearm. It’s fairly easy to flip off and not obtrusive. It would be nice if that safety was a little bit wider in my opinion. More like their Full-Size Smith and Wesson M&P series.

Once you pull the trigger, you’re going to feel some light take-up and immediately hit a hard wall. At that wall there little bit of creep before it goes into a heavy break. This trigger is definitely lighter than a Glock generation 3 wall trigger, but it’s probably not as good as the Glock Generation 4 and 5 triggers, which have more of a rolling break.

Now on the Smith and Wesson M&P 2.0 series, that trigger has similar characteristics. But the sear and the break of the trigger are a lot lighter and crisper. I really enjoyed the 2.0 Smith and Wesson Shield trigger. And I would say that’s probably going to be better than any of the Glock options minus the hinged trigger shoe. Which can be replaced with aftermarket parts. If I’m not going to modify the trigger. Although I would prefer to have a Glock Gen 5 trigger.

The slide lock on the Smith and Wesson M&P Shield appears to be a better design than the Glock. It’s actually very stiff and hard to use. It has a better look than the Glock, but it just doesn’t work as well.

The magazine release on both of these guns is fairly easy to reach. If you have larger hands. But with smaller hands, you’re going to have trouble reaching it, even on the Smith and Wesson M&P Shield. So this gun is more suited to people with larger hands than some of the other more modern firearms on the market like the SIG P365.

So that is something to take into account. If you’re looking at Smith and Wesson M&P Shield, because you have small hands and you think it’ll be easier to reach the controls, then the Glock 19.

The quality on the Glock just seems a little bit better than the Smith and Wesson M&P 1.0’s. They’re not bad guns and for the price, they’re actually a really good value. But the quality overall, when you’re comparing the gun straight up, just doesn’t seem as good. Now, the Smith and Wesson M&P 2.0’s seem to have slightly higher quality than the 1.0 guns. And they’re more in line with the Glock, but the polymer still feels cheaper in the polymer on a Glock. That’s just an opinion. And you can hold these guns side by side and see what you think.

There is a large aftermarket for the Smith and Wesson M&P Shield, both in the 1.0 and 2.0 series, but it’s not nearly as large as a Glock aftermarket. So Glock’s going to win that hands down.

Shooting the Glock 19 is much easier than shooting the Smith and Wesson M&P Shield. The Smith and Wesson M&P Shield is a handful. It has a fair amount of recoil and the same fairly small gun. Whereas the GLOCK 19 is a much larger gun and it can soak up that recoil a little more. With a lot of guns, sometimes if they have more muzzle flip. That means that their recoil is a little less violent.

Value is going to depend greatly on the price of the Shield you’re looking at. Smith and Wesson’s products fluctuate a lot in price while Glock is boringly consistent. You can find a Glock for $500-$620 in your local store unless they’re price gouging. While an original Shield can be found from $299 to $450 and the 2.0 variants usually go for around $450.