When comparing the Glock 43 vs the Glock 43X, most of what we’ll be talking about will be the ergonomics of the firearm. We’ll go over all the other features as well, but a lot of those features are similar, if not, identical on these Glocks.

The Glock 43 was the first micro-9mm that Glock offered. It was soon outclassed by the SIG Sauer P365 that offered a 10-round capacity in a similar-sized gun to the 43’s 6.

Glock introduced the 43X a year after the P365 was introduced, and some would say that it was a direct response to the competition. (Personally, I suspect that Glock had this product design before they knew the SIG P365 was in existence. The P365 is still much smaller than the 43X.) The only real similarities between these two guns are their equal 10-round capacities.

Size-wise, you’re going to see an immediate difference between the two guns. From a weight perspective, the Glock 43X is around three ounces heavier than the Glock 43. In those three ounces, you also get an additional four rounds of ammunition, and that’s honestly going to make up the biggest difference in weight. That said, these guns are similar concealment-wise for most people when carrying inside the waistband. Although the grip is one-tenth of an inch thicker on the 43X, it doesn’t seem so. A lot of that is due to just the scale of the gun. If you’re carrying the Glock 43X IWB, especially at the appendix position, there’s not going to be a huge difference in concealment for most body types. There are some body types where the shorter grip becomes a major advantage. For most people, it’s not as big of an advantage as you think.

The thinness of the grip is going to affect concealment more than anything else. It is easier to conceal the Glock 43. You’re going to have a lot more margin for error, but it’s not like the Glock 43X is a hard gun to conceal.

Both of these guns have similar ergonomics but size does play a role.

These frames are really not that different — the only difference is the Glock 43X is a little bit wider and a lot longer. Now when you go on the overall feeling of the gun, the Glock 43X really feels good in the hand. It’s wide enough that even when somebody with hands of my size, it feels natural.

For somebody with much smaller hands, it’s still going to be a very natural-feeling gun where the grip does fill the hand. You’ve got plenty of length so your fingers don’t hang off. That is going to be an issue on the Glock 43 for a lot of people. Half of my pinky hangs off the bottom of the grip on the 43, meaning that I can’t apply full leverage from that last finger that really helps mitigate recoil. The grip length, I think, is an important issue. For a lot of people, concealment is not an issue. The Glock 43X becomes a hands-down no-brainer. 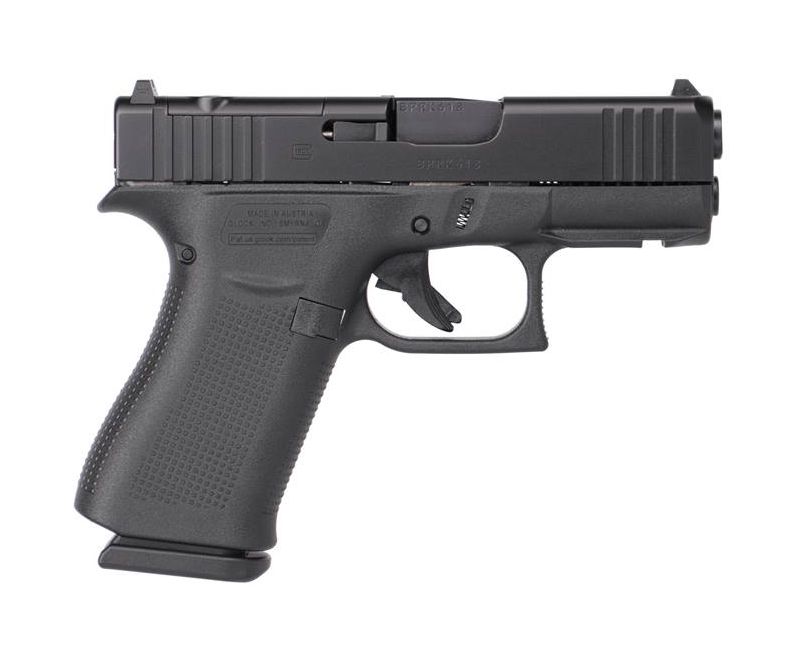 Unless you have extremely, extremely small hands where you have trouble reaching the trigger or any of the controls on the Glock 43X, then the Glock 43X is going to be a better choice over the Glock 43. I’ve seen a lot of women come into my shop who want to carry this gun in a purse and they hands-down like the Glock 43X over the 43, or even the SIG P365.

The texture is identical and it’s not super aggressive. At the same time, it is aggressive enough to give you a good solid grip on the firearm if you’re shooting and your hands get wet. If you get soap on your hands too, though, you can expect the grip to slip around a little. It’s not that aggressive.

There is something to note: If you get a Glock 43X that has a silver finish, the slide will not be as slick as the black finish available on the 43 and 43X. Because of that, the slide will also be slightly easier to manipulate. However, it’s also going to show dirt, debris, carbon, and all of that type of stuff faster as well.

If you’re shooting for accuracy the sights can make a huge difference in the amount of concentration it takes to make the shot.

The sight options are identical on these guns. You can get the guns with the plastic slot filler sights that Glock is known for (which I would suggest replacing immediately with an aftermarket option) or you can get AmeriGlo sights from the factory.

The AmeriGlo sights that Glock ships their guns with are absolutely excellent to have: a bright orange front that really shows up well in the daylight and a rear that is blacked out during the same period. The sight picture is a 3-dot tritium night sight in low light. You’re going to be hard-pressed to find a better set of factory-installed sights.

Both these guns have the exact same slide, so the aftermarket options, as far as sights go, are completely identical.

This is where things change up a little bit. Glock just released the Glock 43X MOS (modular optics system). The Glock 43X MOS includes a light rail in front of the gun, as well as allowing you to mount a red dot. Since the slides are the same, I hope we’ll eventually see Glock introduce the 43 with a system, but I wouldn’t count on it.

Until that time, the Glock 43X obviously has an advantage. You can get the 43 custom milled for a red dot, but it’s going to be costly compared to buying a gun right off the shelf with the feature already included.

When choosing a gun it’s important that the controls work for you. It’s always something I would suggest checking when handling a gun in the gun shop.

The triggers on these guns, believe it or not, are actually slightly different.

The Glock 43 trigger is very much like a Glock Gen3 trigger despite being a Gen4 gun. It has a light take-up until you hit a wall that is very heavy with a very stiff break, and then a short reset right to the beginning of the wall. The Glock 43X, on the other hand, has very light take-up and then has more of Gen3/Gen4 hybrid trigger pull that veers a lot closer to the 4. It’s not quite a rolling break, but it is more of a rolling break than the Gen3 Glock.

Besides that, the triggers and their shoes are identical. If you want to replace them with an aftermarket option, you can use the same trigger shoe, but you will have to get a different bar. The connectors are identical as well.

The slide locks on these guns are identical and are identically placed. It’s just as easy to reach one as compared the other with your thumb. I really don’t think there’s anything to compare there. The firearms might benefit from adding an extended slide lock, but I think this will work well enough for most people. Unfortunately, it is not ambidextrous on either gun, which would be a nice feature to see improved.

Again, the magazine releases are pretty much identical. The reach is just slightly shorter on the Glock 43, and if you have really small hands, that might be an advantage. I can depress the magazine release on both of these guns without breaking my grip.

Quality-wise, these guns are identical. I can’t tell a difference between the two of them. The Glock 43X with the silver slide has a lower-quality look and felt finish, but they are now making the Glock 43X with the black finish. As long as you get the gun with the black finish, then the quality is going to appear similar. That said, I have not had any issues with the finish on my silver Glock 43X. It just doesn’t look as good and really shows dirt and debris.

From an aftermarket perspective, there’s going to be a few more options for the Glock 43. I think that’s changing as the Glock 43X gains steam, though. You have to remember that the 43 has been around for a long time while the Glock 43X was introduced just a little while ago. Aftermarket options are catching up, but a lot of the parts are also interchangeable. Having interchangeable parts is a big deal as you gain traction from years of aftermarket market dominance.

Shooting these two guns are completely different experiences. Both of them have a lot of recoil and the slides are virtually identical. Really, the only difference you’re going to get is from the slightly larger and longer grip on the Glock 43X. If you add a plus-two extension to the Glock 43, it’s going to shoot very similarly to the 43X.

Having that extra bit of grip for me makes a huge difference. It’s just much more advantageous when shooting the gun to get more leverage. Otherwise, they shoot very similarly. If you’re wanting a gun that’s a little more versatile, you’re going to lose some capacity since your magazine is not going to be as wide. You can get the Glock 43 and add a plus-two or -three extension to get a little more capacity and size.

Now I’m about to make things way different. You can get Shield Arms S15 magazines for the Glock 43X that hold 15 rounds of 9mm and a flush-fit Glock 43X magazine. That is a game-changer as it adds 50% capacity over the OEM magazine. However, it doesn’t improve the way the gun shoots.

The 43X still doesn’t shoot as well as something like a Glock 19. Just realize that you might have a huge capacity difference if you’re willing to spend the money to upgrade to the Shield Arms S15 mags. Each gun has its role. I really think if you’re looking for a gun that is really small, deal with the 43. If size isn’t that big of an issue, you’ll probably be better served with a 43X.

Prices for these two guns will be the same unless you get the Glock 43x MOS and therefore the ability to add a red dot optic. Personally, capacity does seem to provide a little bit of value, but so does concealment. You’ll have to decide which feature is more valuable to you.

The pros and cons are somewhat self apparent but here they are at the most basic level.