Page will be updated soon!

Get the best holster for your Shield 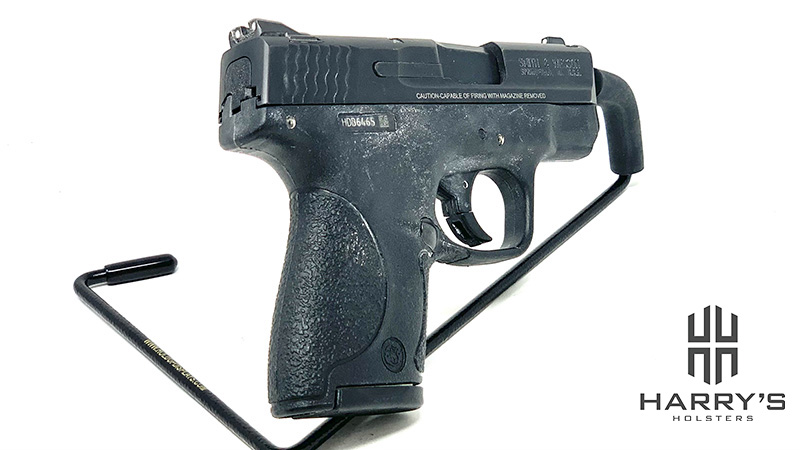 The Smith Wesson M&P Shield has decent overall ergonomics. It doesn’t feel the best in the hand compared to more modern options mainly due to the fact it feels like a full-size duty-grade gun that was just thinned down. Some people will like it and if you have larger hands, I think you’ll like it a lot. One major pro of this design is there is quite a distance between the front strap and the back strap. So, it’s fairly easy to get a good grip on this gun when you’re drawing from an IWB SW Shield holster because your middle finger to pinky finger doesn’t have to move that far between your body and the gun to get a good grip. So, it’s a more comfortable gun to draw than other smaller guns like the sig p365 series.

The ergonomics are good, but they’re nothing to brag about. My biggest complaint is the undercut of the trigger guard and how it doesn’t allow you to get your hand as high as I would like up into the tang of the gun. The slide itself is fairly easy to manipulate; it has serrations at the rear and in my opinion, the Smith Wesson M&P offers some of the best serrations on the market. 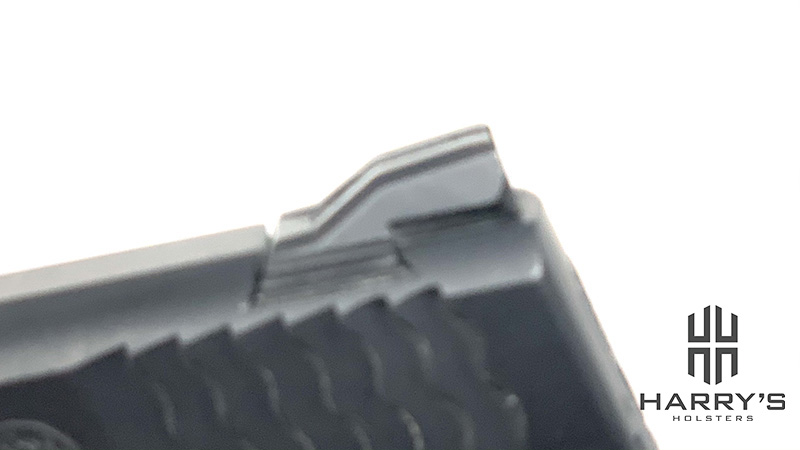 There are no serrations at the front, and considering when this gun was designed that is not uncommon at all. The serrations at the rear are nice and aggressive; they have a wavy look that frankly sets the gun a little bit ahead of its time from when it was introduced in 2012 and still doesn’t look outdated to this date.

The serrations are positive and effective and you can definitely use them with great effect, but if you have wet hands, they might be an issue for weaker handed shooters the trigger itself now as we talked about before I’m not a fan of the hinge. 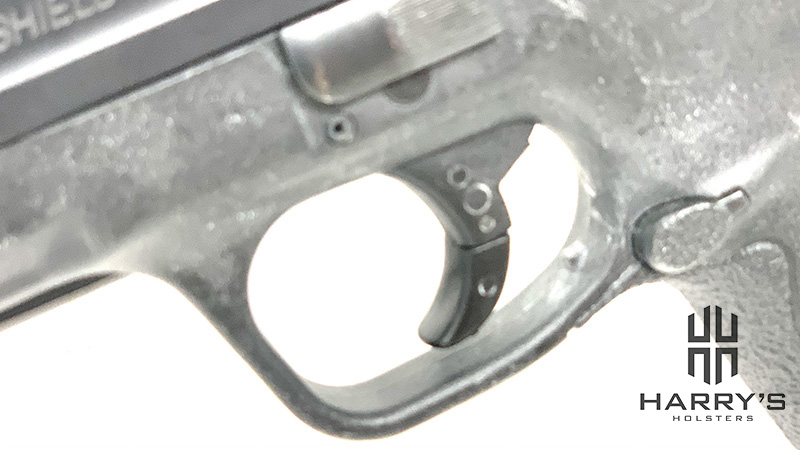 If you’re familiar with the FN509 you know it has a similar trigger design and in my opinion, FN executed it better than Smith and Wesson did. If I were to carry a Smith and Wesson product with a hinged trigger, I would likely have it switched out to an aftermarket trigger for my own safety. The last thing I want to do is pull out the gun and not be able to fire it. That said I haven’t talked to as many people that have had this issue as I have. Due to that, I believe the issue is related to the exact size and shape of my hands. So, this is something I would suggest further thoroughly testing before you make a decision on how the trigger will work for you.

Now, as far as the trigger pull itself it has taken up as you disengage the hinge trigger safety. This take-up is fairly light with a little bit of spring in the rear of it. Then you start to hit a little bit of creep before you hit a very hard wall. And then the trigger breaks. And as it’s breaking you can feel a little more creep.

The trigger itself is quite heavy and is heavier than most of its counterparts. This is a defensive carry gun trigger and not a match trigger, so I would keep that in mind when rating the trigger. Again, there are multiple aftermarket options that allow you to improve the trigger pull if that’s what you desire. 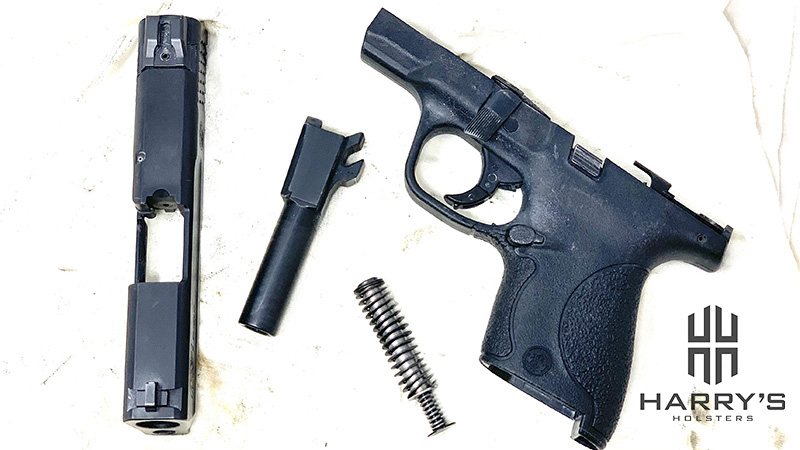 Maintaining the Smith and Wesson M&P is quite easy to disassemble the gun you’ll want to lock the slide to the rear by pulling the slide back and pressing up on the slide stop. And then there is a takedown lever in front of the gun that you’ll then need to rotate down 90 degrees. Once that’s done, you’ll look inside the Smith and Wesson M&P Shield from the top of the ejection port and you’ll see a little yellow spring on the back left side of the mag well. 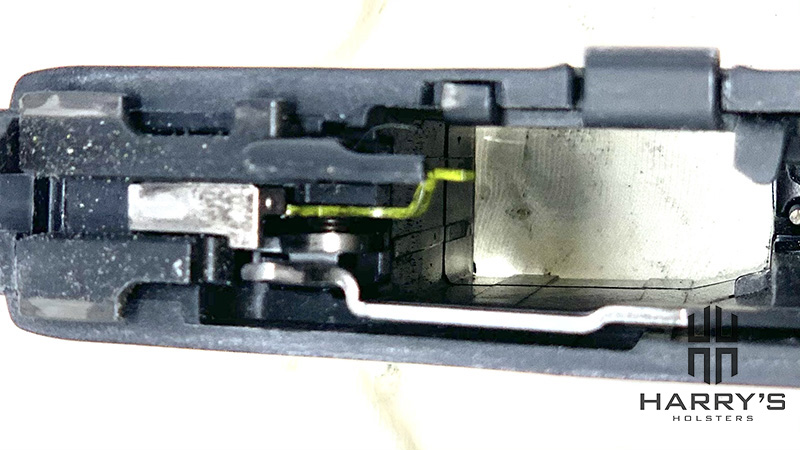 You’ll want to take a screwdriver or a punch and pull that yellow spring down, that will disengage the striker and then you can press the slide forward. You can also accomplish the same thing while letting the slide ride forward, holding the gun in battery, and then pulling the trigger to drop the striker. 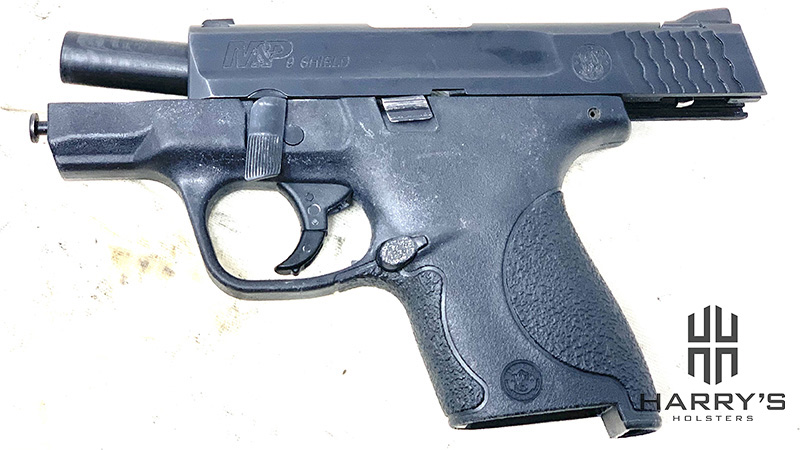 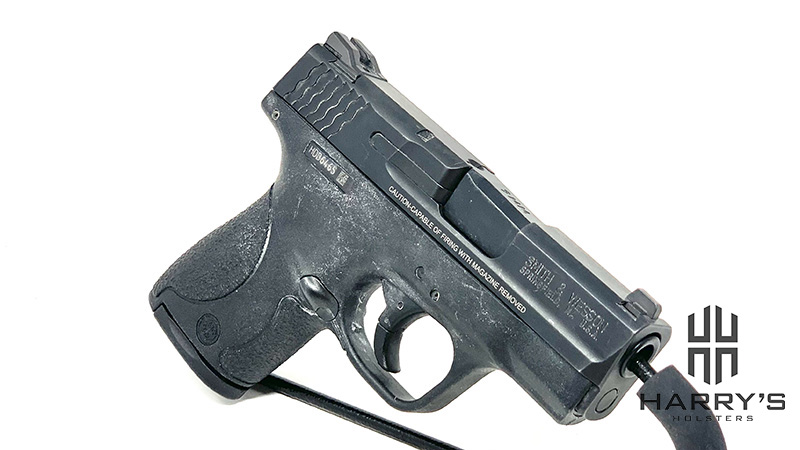 Your mileage may vary on the looks but I think the major saving grace is the rear slide serrations the Smith Wesson M&P series use. They add a nice touch that balances out the gun. The slide really has all the looks of the gun with its chamfers and profiling.

Shooting the Smith Wesson M&P Shield is probably what you’d expect. The gun has quite a bit of recoil, not a ton of recoil but it’s a small snappy gun. You can definitely still shoot it well, but it’s not an exceptional performer that just stands out amongst the crowd. The heavy trigger pull is something you’ll have to work over and the ergonomics may or may not work for you.

Personally, my biggest downside of the shield is the texturing. You just can’t get enough grip on this gun for it to shoot as well as I’d like. But the upside is the long distance between the front strap and the back strap that does allow me to get a pretty good purchase on the gun, but again I can’t always reliably disengage the hinged trigger on the Smith Wesson M&P Shield.

That means oftentimes what happens is I’m pulling very heavily on the top of the trigger and I have to keep on applying pressure until I’m applying way more pressure than what it would take to break the trigger and my finger eventually slips down and jerks the trigger to the rear.

Again, your mileage may vary with the Smith Wesson M&P Shield, but that’s your mileage. And the good news is this gun isn’t expensive to grab and go out and test. They’re very common and they can be found in almost any gun store.